Home » Browse PostBourgie » Your Monday Random-Ass Roundup: ‘This Is What Change Looks Like.’

Your Monday Random-Ass Roundup: ‘This Is What Change Looks Like.’ 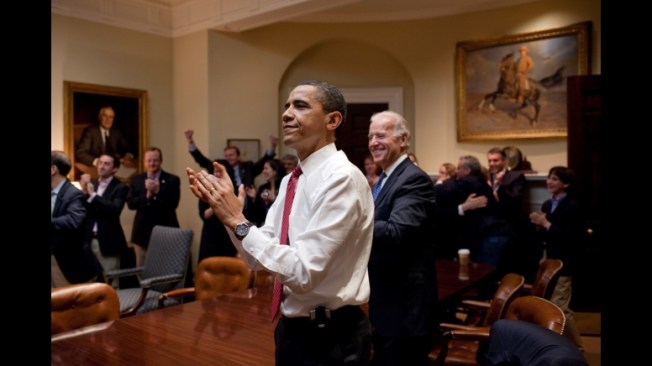 So you may have heard: after eluding progressive presidents and lawmakers for nearly a century, House Democrats finally approved sweeping legislaton that would bring  America to near-universal health insurance coverage. The bill nearly died several times in the interminable debate, with interventions from President Obama and deft maneuvering by House Speaker Nancy Pelosi (props due) keeping it alive. No matter what happens now, Barack Obama’s presidency will go down as one of the most significant in the nation’s history.

Here’s a list of the Dems who voted against. Of particular interest to is Artur Davis, the Alabama Democrat who split with the Congressional Black Caucus on the healthcare vote, and who is running to become the first black governor in his very red home state. (G.D.)

For all his posturing, Bart Stupak’s coalition of antiabortion Democrats came undone over the last week, and all he he managed to get was a meaningless executive order from the White House that allowed him to save face. Stupak did have a surprising moment where he came out in opposition to a Republican effort to keep the antiabortion argument alive — and someone on the floor called him a “baby killer” for his doing so. (G.D.)

David Frum, for his part, is pretty dejected. “There were leaders who knew better, who would have liked to deal. “But they were trapped. Conservative talkers on Fox and talk radio had whipped the Republican voting base into such a frenzy that deal-making was rendered impossible. How do you negotiate with somebody who wants to murder your grandmother? Or – more exactly – with somebody whom your voters have been persuaded to believe wants to murder their grandmother? …I’ve been on a soapbox for months now about the harm that our overheated talk is doing to us….So today’s defeat for free-market economics and Republican values is a huge win for the conservative entertainment industry….For them, it’s mission accomplished. For the cause they purport to represent, it’s Waterloo all right: ours.” (G.D.)

Kate Harding writes: “What can your average guy learn about women by watching movies made for them? Not much.” (belleisa)

Bill Clinton said a while ago that Obama’s poll numbers would jump ten points when health care was passed. As of early Sunday morning,the president’s approval rating was back up to 50% from its low of 43%. (G.D.)

The Center on Budget and Policy Priorities points out that the reconciliation bill also significantly reforms parts of the student loan system, including allowing the government to directly lend to students, as opposed to subsidizing banks to do the same. (G.D.)

Former McCain economic adviser Douglas Holtz-Eakins is about to lose his COBRA coverage, and Brad Delong tells us Doug has a pre-existing condition. Sounds like someone is about to win from HCR! (Monica)

“I’ll tell you why I cheat. I need to,” says the author of “Why Men Cheat?” in the April edition of Esquire. (belleisa)

About 200,000 people marched on Washington to press lawmakers on immigration reform. (G.D.)

In commemoration of the 7th anniversary of the war in Iraq, George Packer offers his thoughtson the rooms left behind by soldiers killed in action captured in this oddly haunting slideshow by Ashley Gilbertson. (Alisa)

From Tayari Jones, this weekend the poet AI passed away. (belleisa)

School superintendents worry that the White House’s push to turnaround schools could hurt principals in struggling schools that are seeing progress and make it harder to replace them. (G.D.)

Thomas Hagan, one of the men who killed Malcolm X, was granted parole after decades in prison and 17 requests for parole. (G.D.)

From the Telegraph UK, “Why is women’s fiction so miserable?” (belleisa)

How do you feel about casual sex? RH Reality Check’s Heather Corrina wants to know. (Alisa)

Thoughts? Links? Have at it in the comments…