More on the Soda Tax. 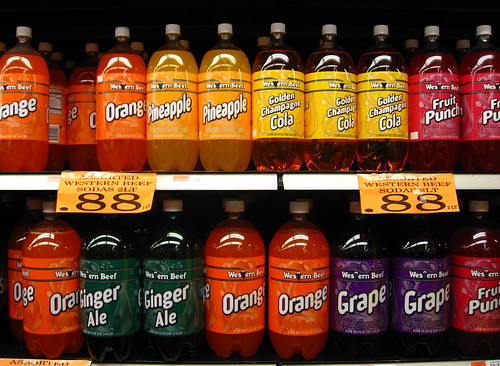 By SpecialKRB; Used via Creative Commons.

After I wrote a column supporting New York’s latest effort to tax sugary drinks, I read RaceWire’s column on how it’s just another tax to hurt poor people. While, yes, sales taxes are regressive, decrying this tax as a social justice issue misses the point.

For starters, as I wrote in my piece, this sales tax hits producers who use concentrated syrups to add a lot of calories to their drinks. That might sound like a moot point, since the tax will be passed on to consumers as a higher-priced drink, but it’s important to note that it also includes fruit juices with added sugar. In those instances, consumers can very easily shift their purchases to juices with more natural fruit that are slightly less sweet and have higher nutritional value per calorie. (The science on how bad sugary drinks are for us is pretty clear, but for some reason the RaceWire author, Michelle Chen, calls it uncertain. To support that, she links to a newspaper article that notes scientific consensus but quotes the beverage industry calling that into question.)

Second, assuming that the tax will disproportionately hit poor families assumes they won’t shift their purchases elsewhere in response. The average price of milk is $3.50 a gallon, while the average price of a 2-liter bottle of Coke is $1.70. Two bottles of Coke, which would provide about the same amount of liquid as a gallon of milk, would still be 10 cents cheaper. Part of the reason it’s so cheap is because sweeteners like corn syrup are cheap, and they’re so cheap because of government subsidies. (The dairy industry is also, obviously, heavily subsidized, but making it even cheaper to compete with soda isn’t the answer). It’s fine to talk about personal choice, but you have to note that the government is already interfering in such a way that it encourages families to buy more soda than is healthy. It’s possible, then, that families now are actually forgoing drinks like milk because soda’s so much cheaper. We’re subsidizing junk food, which to me is a more important social justice issue. The food we make most available to people who are watching their wallets is the food that will cost them most in the long run.

You could make an argument that ending subsidies would do that better, which Chen acknowledges, but that would still result in making soda more expensive. Moreover, it would require a national consensus. And lowering the price of healthier foods doesn’t discourage purchasing soda, because subsidizing healthier foods just encourages spending more money on more calories overall. If public health is the goal, the better way to address it is to raise the price of soda to encourage families to spend money elsewhere. The tax would be used to close a budget gap in the Department of Health which, incidentally, provides medical care to the poor. So to me, this is akin to raising the gas tax and subsidizing public transportation. It might disproportionately hit poor people at the stands, but overall, it’s a progressive policy.

So while Chen says Albany should be more worried about balanced diets than balanced budgets, it seems to me they’re concerned with both. And she says she doesn’t see a parallel effort to expand access to good food in all areas of New York, which is funny, because New York City is actually doing a pretty good job at that very thing. Chen links to a piece that notes some of the problems with the supermarket initiative, but the fact remains that bodegas often do not carry fruit and vegetables, though the Bloomberg administration tried that too. And, in the meantime, 1,000 fruit carts have been dispatched to under-served communities.

It’s not as though there’s a perfect food solution. But just because lower-income families spend a higher percentage of their income on soda and any tax attached to it, that doesn’t mean middle-class and higher-income families aren’t helping to foot the bill every time they buy soda, too. That’s why Coca-Cola has it’s eye on the worldwide emerging middle class. And though it’s bad to entirely rely on sin taxes to close budget holes when there are better ways to raise revenues, this is more about making soda sensibly priced.