Home » Browse PostBourgie » They Got Money For Wars/But Can’t Feed the Poor.

They Got Money For Wars/But Can’t Feed the Poor.

If you want to understand the anger at Obama’s proposed freeze on discretionary spending, just take a look at how the 2009 federal budget shook out: 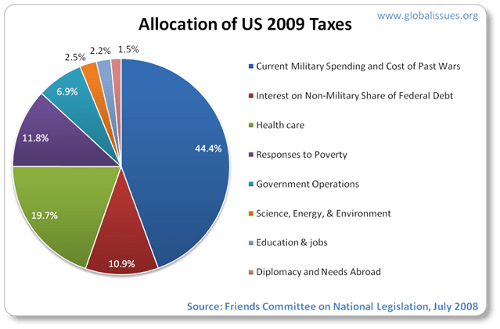 The facts about America’s bloated, excessive, always-increasing military spending are now well-known.  The U.S. spends almost as much on military spending as the entire rest of the world combined, and spends roughly six times more than the second-largest spender, China.  Even as the U.S. sunk under increasingly crippling levels of debt over the last decade, defense spending rose steadily, sometimes precipitously.  That explosion occurred even as overall military spending in the rest of the world decreased, thus expanding the already-vast gap between our expenditures and the world’s.  …

Since much of that overall spending is mandatory, military spending — all of which is discretionary — accounts for over 50% of discretionary government spending. Yet it’s absolutely forbidden to even contemplate reducing it as a means of reducing our debt or deficit.  To the contrary, Obama ran on a platform of increasing military spending, and that is one of the few pledges he is faithfully and enthusiastically filling (while violating his pledge not to use deceitful budgetary tricks to fund our wars) …

The clear fact is that, no matter how severe are our budgetary constraints, military spending and all so-called “security-related programs” are off-limits for any freezes, let alone decreases.  Moreover, the modest spending freeze to be announced by Obama tomorrow is just the start; the Washington consensus has solidified and is clearly gearing up for major cuts in Social Security, Medicare and Medicaid, with the dirty work to be done by an independent “deficit commission.”  It’s time for “everyone” to sacrifice and suffer some more — as long as “everyone” excludes our vast military industry, the permanent power factions inside the Pentagon and intelligence community, our Surveillance and National Security State, and the imperial policies of perpetual war which feed them while further draining the lifeblood out of the country.

It’s only a slight exaggeration to say we don’t use combat aircraft in the wars we’re fighting. You have to come up with a baroque set of Michael Bey-esque geopolitical calculations by which we would use combat aircraft in any conceivable war. The U.S.’s area of combat-aircraft dominance is called Planet Earth. No Air Force is going to challenge ours. No actual U.S. adversary has an air force, and the list of real-potential U.S. adversaries that do starts with Iran and ends with North Korea, neither of which are remotely stupid enough to test us in the air. The most likely scenario for using combat aircraft in a U.S. war is an alien invasion.

What is relevant to the wars we fight are (a) remotely-piloted aircraft like drones, (b) surveillance aircraft like drones, (c) helicopters, and (d) especially airlift, to get our ground troops from Point A to Point B. And as you can see from the chart, we don’t spend nearly on that stuff what we spend on combat aircraft. [Update: Todd has helpfully clarified to me that attack helicopters are included in the combat-aircraft line. So, fair enough.]

But by all means, freeze spending on school lunch programs and Head Start and shit like that.

As Ackerman points out, almost half of that goes toward procurement spending on combat aircraft. If we simply stopped purchasing combat aircraft for three years, we’d come close to saving as much money as we would by freezing the entire non-defense discretionary budget. But, of course, nothing says “centrism” like cutting food stamps and unemployment benefits!

A large part of the problem with the budget freeze — even if it is mostly symbolic — is that it has a real, and negative, impact on employment. In the aggregate, a three-year freeze on non-defense discretionary spending will cost the economy several hundred thousand jobs at a time when we need every bit of employment growth. What’s more, a budget freeze will have the likely effect of keeping the federal government from following policies that could alleviate unemployment. For instance, the Center on Budget and Policy Priorities recommends extending the Temporary Aid for Needy Families (TANF) emergency fund:

Job placements in the subsidized jobs programs that the fund supports often run for at least six months. A number of states, anticipating the fund’s expiration on September 30, are planning to start scaling back their programs well before then. Some states will stop making new job placements beginning in March. Other states are reluctant to institute new or expansive jobs programs with such a short window to implement them.
Moreover, a majority of states are drawing on the TANF Emergency Fund to provide basic cash assistance to the increasing numbers of poor families with children as unemployment rises and more workers exhaust their unemployment benefits. This basic assistance is itself a job creator because the families receiving it spend virtually all of it immediately to meet basic necessities, thereby boosting local economies. Because the Emergency Fund is set to expire on September 30, however, some states are now considering cutting basic cash assistance for very poor families starting in the next state fiscal year, which begins on July 1 in most states. This problem is compounded by the fact that the TANF Contingency Fund, created as part of the 1996 welfare law to help states meet increased need during recessions, has run out of money.

The impending reductions in basic cash support will cause affected families to cut back their expenditures. This will cause a further loss of jobs, as well as a significant increase in severe hardship and deprivation.