It’s not so hard to say goodbye. Via Anna N. at Jezebel, we learn:

Whole Foods will offer steeper employee discounts to people with lower BMIs. […] Whole Foods CEO John Mackey explains the program in a letter, reproduced below. Apparently it’s part of an initiative to reduce health care costs, which is interesting since Mackey is against the health care reforms that would actually reduce costs for all people. 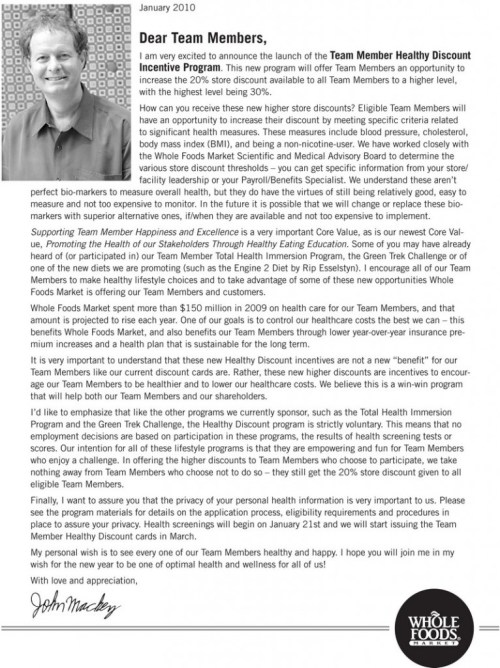 This is patently absurd. One, because BMI is a terrible indicator of health. PB proprietor G.D., who does a ten-mile run once a week, is technically bordering on obese due to his height and weight (believe you, me, he’s the picture of health). And me? I’m a short woman who meets the weight requirements for obese, but I have sizeable hips/backside and a smaller upper body, which, according to some researchers means I’m less likely to suffer from heart disease than women of similar weight that’s distributed differently. (For more ridiculousness on BMI, check out this slide show at Shapely Prose.)

The second reason it’s absurd is because making it more expensive for larger employees to acquire food is a stupid way of trying to make them lose weight. The policy is punitive, not incentivizing. If John Mackey was truly interested in the health of his employees, why wouldn’t he lower the costs on healthier, unprocessed foods like fruits and vegetables for all employees? Moreover, thin employees can be just as unhealthy as fat ones.

Look. I believe in eating well, and being healthy, and exercising, and all that good stuff. But using a measurement like BMI to determine employee discounts is ridiculous. This, for me, is the final straw. My support for the chain, which has been shaky since Mackey came out against health care reform, has concluded. While I’ll miss the convenience of shopping at Whole Foods — especially the bulk bins of dried beans, rice, and flour — it just doesn’t taste good anymore.