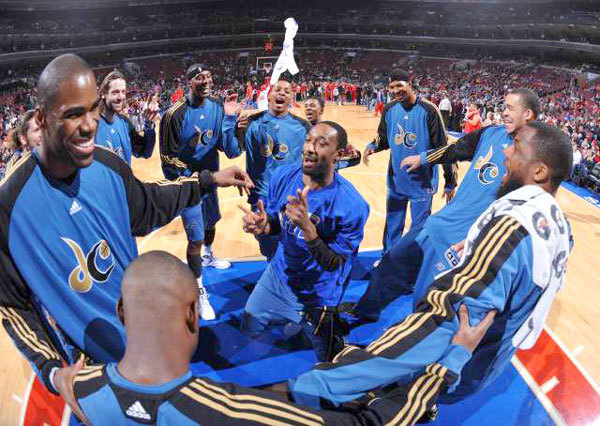 Gilbert Arenas is much better at playing basketball than he is being funny. Because Arenas is really awful at the latter, it may have something to do with why he won’t be doing the former for an indefinite amount of time.

That things have gone so poorly for Arenas during a time of crisis is not much of a surprise. Especially if you’re at all familiar with Arenas’ background:

You have to go back to the mother who gave him up there.

The story is titled “The Psychic Scars That Shaped an NBA Star,” so that gives you a hint about how things unfolded from there.

Of course, Arenas rebounded and persevered to become a three-time All-Star and one of the NBA’s most distinctive personalities. In the same story, Arenas is described as “one of the league’s most enigmatic figures, an idiosyncratic loner, a charmingly candid young man who freely admits he pushes away those who get close to him.”

Later in that same story, we’re told about his highly-contentious relationship with his longtime girlfriend and mother of his daughter. During a custody and paternity dispute, one that forced him off the court for a bit, Arenas and his teammates tried to make light of the situation:

The ordeal went on so long it actually became a running gag with some of the Wizards. “We made it into a big joke,” Arenas said. “My teammates would say, ‘Gil’s on the run again,’ or, ‘You dodged that one like “The Matrix.” ‘ Oakland, Sacramento, Houston, Chicago. They were trying to serve me everywhere. I would stay under an alias.”

I, for one, missed the punchline. But through this piece, you can see how we got from there to here. As I mentioned earlier, it’s no surprise that he would respond poorly when faced with crisis.

So with that in mind, it’s hard for me to get much out of this Twitter vent from Columbia professor and ubiquitous news pundit Marc Lamont Hill yesterday. It starts here, goes here and ends with this:

The Arenas situation is a perfect example of why we MUST develop more healthy and functional conceptions of masculinity.

Look, the latter part of that might be true. There’s certainly some value in developing healthier and more functional conceptions of masculinity. But I’m not seeing the connection to Arenas here.

I’m wary of drawing larger conclusions from very specific incidents, particularly when a unique personality like Arenas is involved. In the end, Arenas ain’t got nothing to do with me, my little cousins, my friends from high school or my father.

He’s his own man, with his own set of problems. Let him deal with his. Let him serve out his suspension, however long it lasts. And don’t try to make his troubles ours.

That’s best left to pathology pimps like this guy.