The Magical Person of Color, Now on Broadway. 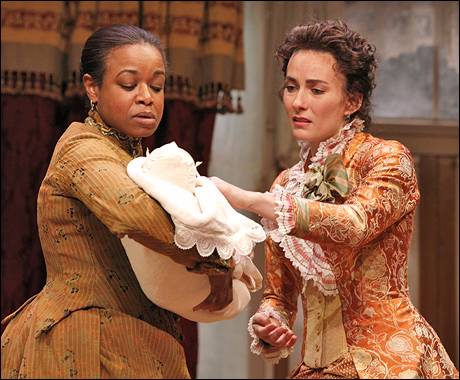 I’ve seen a recurring theme in high-profile Broadway plays of late, and at first it made me wonder whether white playwrights had somehow been left out of conversations on portraying race. Then I remembered plenty of movie-makers and writers haven’t really done well lately, either.

Two years ago, I saw and enjoyed August: Osage County by Tracy Letts, which won the Pulitzer Prize and Tony Award. Overall, it was really well done, but there was one big problem: the stoic center around which the family unwinds was a Cheyenne woman hired to be a housekeeper by the family’s patriarch before his disappearance. At the end, the mother, undone by her own maliciousness, is held by the housekeeper, Johnna, who rocks back and forth and sings to her why she cries. Because, obviously, American Indians are closer to the Spirit.

It’s a familiar story: a young prole of great, barely hidden sensitivity meets and thaws an emotionally frozen middle-aged white man. Will Franco’s mere presence in the shop cause Arthur to embrace the gospel of the soul and live, live, live? But watching Franco perform his buck-and-wing for Arthur’s delectation starts to feel odd after a while. (Franco literally dances around the restaurant to Stevie Wonder’s “Higher Ground.”) He is trying to wrest approval not just from his employer but, one suspects, from the whole white world. He is funky but not rough, jokey but not menacing, intelligent but not challenging: in short, he is an acceptable black man. Franco has barely any back story, but would it make much difference if he did? He’s a racial trap, a repository for all our liberal feelings.

… The forty-four-year-old playwright has exchanged the thrill of individuality for the comfort of convention. His considerable compassion finds an outlet here in a timeworn cliché—middle-aged white dude learns about love and fatherhood from the unknowable young black male—and ends up seeming banal.

With this recent history troubling me, I went to see Sarah Ruhl’s latest play, In the Next Room (or the vibrator play). The story here is a bit more complicated. A maid named Elizabeth who has recently lost a baby becomes a wet-nurse for a doctor, and is played by a black woman. On the one hand, it makes sense; it’s the 1880’s in New York. It’s completely likely that the maid/wet-nurse would be black. It is post-Civil War America, and the play’s characters are awkward about the subject of race in ways that feel true for the time: The doctor and his wife spend a moment wondering whether a black woman should nurse their child and an artist falls in love with Elizabeth and calls her the era’s Madonna.

And then the cliches come out. Elizabeth gives up her milk for the white family’s baby, literally stepping in the role of mother. The artist makes much of her beauty while she nurses. Moreover, Elizabeth is the only character in the play who’s ever seemed to enjoy sex with her husband. Read: she’s unburdened by civilization’s mores, she can give and receive. She’s strong enough to bear the death of a son. The delicate white woman is so removed from nature she can’t produce her own milk and frets she never could endure such a tragedy. She is weak, the black woman is strong, and we’ve actually seen this play before.

I wish Ruhl had been more careful. You can try to play with stereotypes to subvert them, but this play seems only to rely on them without even knowing it. And it troubles that so few see even a hint of a problem or even know enough to guard against potential ones.