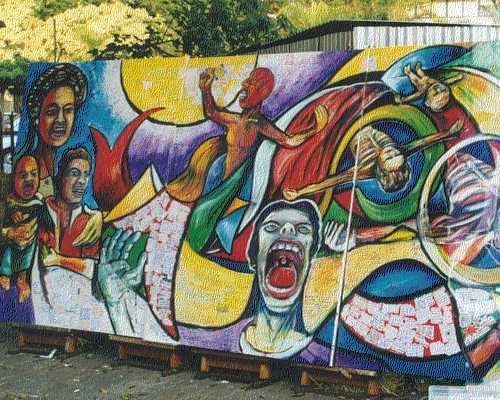 by Kiana, x-posted from ProperTalks.

It’s been three years since my father’s mother, my Nana, died after a lengthy battle with AIDS. It’s been a year since I decided to write openly about it here for Worlds AIDS Day. And it’s been about three hours since I first attempted this post and allowed myself to go to that place I was in a year ago when I tried to come up with the right words to describe how AIDS has affected my family.

It never gets easy telling complete strangers something so personal about a family member who didn’t even have the strength to tell me herself. When I think about Nana’s last months, the times I reluctantly visited her in the hospital – she looked so withdrawn and skinny; I couldn’t stomach it much – I wonder if she knew I knew that she was fighting to live with AIDS. And she put up a heck of a fight, but no insurance, no money, and experimental treatment don’t mix well.

The way I found out AIDS-related complications had been forcing Nana in and out of the hospital, for years, also made me wonder if  the truth about her illness was ever meant to reach me. It was sometime in 2006, I was sitting on the couch and my mother just spit it out as if she was discarding gum or letting me know it was cold outside. I don’t know what she said before, I only remember:

Your Nana has it.

I remember sitting there, completely still, for what felt like eternity. I will remember that feeling like yesterday forever. I was hurt, nauseous, I was angry, and worst of all, I thought about the times I kissed her on the cheek…the times she kissed me, even though I was taught in thousand dollar chemistry classes that HIV and AIDS do not spread that way. In seconds my mother attempted damage control.

I’m sorry. I thought you knew. Your father said he would tell you.

My father didn’t tell me. No one did till that night I was sitting on that couch. I’m not angry now though; I can imagine how hard it was for the family that did know to carry the truth without any support. Without anyone to talk to. Frankly, my family still doesn’t talk about it and I’m almost hoping this isn’t the week some of my younger cousins decide to visit us here. They shouldn’t find out like this.

It’s been hard for me to make sense of it all. Still, I don’t try to tuck it in that place where I store all of my other issues. Instead I make it a point to talk and write about this as much as I can with anyone willing to listen. I intend to share till it rolls off my tongue like I actually am discussing the weather.

I find it easier to share Nana’s story with children. Children don’t look at you with disgust, or shock. They rarely judge and they listen, something we don’t give them enough credit for. Last summer the reading program I work for got a shipment of books, Ana’s Story, written by Jeanna Bush (yes, that Bush). It’s a simple, but gut wrenching, read about a 17-year old girl Jeanna met when she worked for UNICEF. Ana was born with HIV and is expecting her first child. My kids loved her story.

For the most part, children have grown up with the words AIDS and HIV. They’ve seen the ‘know your status’ commercial spots on BET, or they know it’s what Magic Johnson “has”. They know all the dangerous myths advocates attempt to fight too.

I think it’s easier to debunk these myths with children. Adults tend to be an entirely different monster. In the years after my grandmother’s death I’ve heard stories that make me sad for humanity. The year Nana died, I wanted to learn as much about AIDS and HIV as I possibly could so I decided to spend a semester researching the topic and talking to people for an investigative journalism class. I was mostly interested in the diseases’ impact on the Black community, particularly Black women, and it just so happened to be the year Primetime did an extensive piece on AIDS in Black America. At the time I was too embarassed to talk about my grandmother. I didn’t mention her once in my story, or to my class.

My sorority chapter held an HIV Awareness event on campus that year and invited a woman to speak who found out she was HIV positive in the late 80s. I wrote about it for my class:

W____ said that when her doctor told her she had contracted HIV, and not Chlamydia [as she suspected], he also told her that he was no longer willing to treat her and then escorted her and her daughter out the back door of the clinic.

Eventually doctors at UCLA Medical Center agreed to treat her but not before taking drastic measures.

“I bet I’m the only woman who has ever had an entire floor to herself to have her child delivered,” [she] said.  “Back then, people – even doctors – believed you could get AIDS from just being around a person.”

That was in 1987. We’re approaching a new decade and people still hold on to these untruths and act on them in the nastiest of ways. I’ve heard stories about folk changing their toilet seats after someone with HIV has used the restroom. Friends have told stories about how people have been scared to touch them because they had family with the disease. It’s stories like these they make me know how hard it probably is for my family to talk about Nana’s story with other people, or within the family.

But it’s days like today, when the entire world stops to honor those living with the disease, and those who have succumbed to it, that makes me a bit hopeful. Days like these make it a little easier to share my grandmother’s story.

I see that my family is not alone. There are millions and millions of families like mine. I wish them courage to break the silence too. It’s the only way to kill the stigma, the ignorance, and maybe someday, the disease.

The mural up top was done by Xavier Cortada. Images of his work to commemorate the AIDS pandemic can be found here.