Your Monday Random-Ass Roundup: Go Away, not Rogue.

Dave Weigel for the win on Twitter this afternoon: “Weird, Oprah has some unemployed conservative blogger on today”: 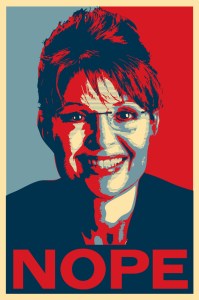 For a second, I was confused. I thought he was talking about Lou Dobbs.

Regardless, once I finish this round-up, I’m putting together a proposal to make our next book-of-the-month selection “Going Rogue.” I hear all the kids are reading it:

1. The NYT’s Michiko Kakutani reviews Sarah Palin’s much-hyped memoir. “Just as Ms. Palin’s planned book tour resembles a campaign rollout — complete with a bus tour and pit stops in battleground states — so the second half of this book often reads like a calculated attempt to position Ms. Palin for 2012. She tries to compare herself to Ronald Reagan by repeatedly invoking his name and record. She talks about being ‘a Commonsense Conservative’ and worrying about the national deficit. And she attempts to explain, rationalize or refute controversial incidents and allegations that emerged during the 2008 race.” (G.D.)

2. By now, you’ve heard that Sept. 11 co-conspirator Khalid Shaik Mohammed and four others will face trial in New York for their roles in the worst terrorist attack on U.S. soil. Glenn Greenwald, Juan Cole and Amanda Marcotte offer their takes on the completely predictable right-wing whining about the Obama Administration’s failure to indulge totalitarian notions of justice. (Blackink)

3. Nearly half of all the country’s homeless vets are black. (G.D.)

4. More about vets: Tara McKelvey uncovers how Bush-era officials substituted pop-Christianity for treatment of post-traumatic stress disorders and depression. “God doesn’t like ugly,” one political appointee told Paul Sullivan, an analyst in the VA’s Veterans Benefits Administration, in a clumsy attempt to reduce the cost of caring for psychologically traumatized veterans. “You need to make the numbers lower.” (Blackink)

6. As campaigning for the 2010 Senate race cranks up in Florida, the state GOP is on the verge of civil war. Hopefully, they’ll all secede when it’s over. (Blackink)

7. Leigh does the math on the Roman Catholic Archdiocese of D.C.’s threat to shutter programs aimed at helping the city’s poor if its lawmakers decide to move forward with same-sex marriage. Shani’s take is over at The American Prospect and Jamelle’s take on the Church’s politicization is at Spencer Ackerman’s spot. (G.D.)

8. Speaking of Shani, she put in serious work last week over at TAPPED. We salute her and her efforts. A link to the Web site is here.

9. Also, the FANTASTIC (emphasis is Shani’s) Majora Carter – will be blogging there for the next two weeks. Here’s a sample.  (Shani-o)

10. So chocolate milk is good for you. Now all we need is an excuse to lace it with vodka a la Roger Sterling. (Alisa)

11. Speaking of Roger and the gang – WANT. (Alisa)
12. Steven D. at Booman Tribune has a righteous rant about the epic fail of abstinence-only sex education. (Blackink)
13. Residents in a rural Maine town (really, is there any other kind?) are opposing a multifamily housing complex that would expand housing options for immigrant laborers. The aforementioned Dobbs would be proud. (Blackink)
14. The Philadelphia-area swimming pool that was embroiled in controversy during the summer for allegedly discriminating against minority campers has filed for Chapter 7 bankruptcy. (Blackink)

16. Over at Bitch Ph.D., M. LeBlanc has an interesting post about pseudonymity and sexual shame. “I look back and think, man, if I were writing under my real name, would I ever have written any of those things, all of which I’m proud of? I know I wouldn’t have. But why?” (Blackink)

18. Double X will be absorbed back into Slate. Can’t say I’m that sorry when good pubs like the Washington Blade are dying. (Shani-o) *Ironically (if that’s even the word, this item was a last-second addition to the round-up. I initially had the NYT Magazine’s profile on Megan Fox here. Guess I still do).

19. It’s a given that 50 Cent is always badly in need of attention. Now he seems to want some from Jay-Z. (Blackink)

20. For those of us who couldn’t make it or weren’t invited, here’s Spencer Ackerman’s abridged account of the Cold Drank Summit. Blog sis Alyssa also talks about her trip to Howard with Shani. (Blackink)

21. If you watched last night’s epic renewal of the Patriots-Colts rivalry, you should know that the math agreed with Belichick. (Blackink)

22. A new study shows that cynicism and negativity may actually enhance the experience of the game. No wonder I love football so much: I grew up rooting for the Oilers.  (Blackink)

24. Milwaukee Bucks rookie point guard Brandon Jennings on the challenge of the NBA: “‘Sometimes it feels like Oak Hill (Academy) out there,’ he said. For Jennings, the NBA is already akin to high school. Rookie dominance seems assured. Stardom is the next stop.” (Blackink)

25. And finally, on a much more somber and tragic note, I want to learn a lot more about Shaniya Davis than Sarah Palin over the next couple of days. But not really. If you all know what I mean.

Until the next time, stay up.