Making Sense of the Senseless. 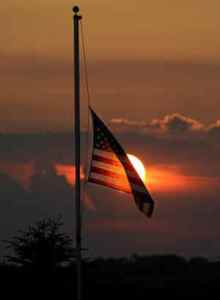 In the saturation coverage right after the events, the “expert” talking heads are compelled to offer theories about the causes and consequences. In the following days and weeks, newspapers and magazine will have their theories too. Looking back, we can see that all such efforts are futile. The shootings never mean anything. Forty years later, what did the Charles Whitman massacre “mean”? A decade later, do we “know” anything about Columbine? There is chaos and evil in life. Some people go crazy. In America, they do so with guns; in many countries, with knives; in Japan, sometimes poison.

We know the emptiness of these events in retrospect, though we suppress that knowledge when the violence erupts as it is doing now. The cable-news platoons tonight are offering all their theories and thought-drops. They’ve got to fill time. I wish they could stop. As the Vietnam-era saying went, Don’t mean nothing.

Ten years ago, when I was a reporter at my college newspaper, Larry Gene Ashbrook walked into a Fort Worth, Texas, Baptist church and opened fire, killing seven and injuring seven more. He then turned the gun on himself.

When I arrived at the grisly scene later that evening, I couldn’t help but wonder what sort of evil – or  mental illness, or both – would compel someone to wreak that sort of havoc on a group of innocent people.

The wondering has never ceased.

As if divining a motive would make things better.

This shit is really complicated. We don’t have any answers, and we might never have any.  It really doesn’t matter either way.

Best instead to offer our thoughts and prayers to the survivors and family members of the victims at Fort Hood.