Home » Browse PostBourgie » There is No Binary.

There is No Binary. 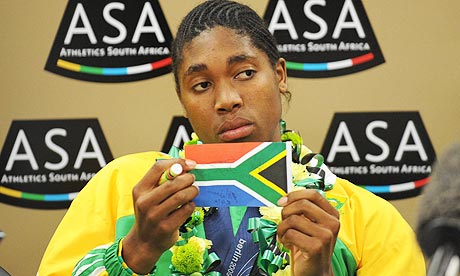 As if we needed another reason to think Kai Wright is pretty much amazing. Wright talks about what Caster Semenya has lost, no matter what the outcome of her sex test is, and why the myth of sex being a binary is so very damaging:

But the reality is that Semenya may be neither “boy” nor “girl,” or could be both. And who cares? It happens. Our social certainty about the male-female divide is not supported by biology. As Northwestern University bioethics professor Alice Dreger told the New York Times last week, “As I like to say, ‘Humans like categories neat, but nature is a slob.’ ”

Children are routinely born with cellular variation on the XX and XY chromosome sets that define boy and girl status. Hormone levels vary, too, as do the secondary traits we associate with a given sex. People have large, protruding clitorises; scrotums divided such that they look like labia; inactive hormone receptors and on and on. Anywhere from 1 in 1,500 to 1 in 2,000 births require specialists to assign a child’s sex, according to the Intersex Society of North America. After these assignments are made, cruel plastic surgeries to “correct” perfectly natural physical variations are often performed for no medical purpose whatsoever. Kids are mutilated to ensure they fit comfortably inside our mythical gender boxes.

We cling to this lie of binary genders for the same reason we fantasize about the essential nature of race: to make unjust social hierarchies seem natural. But they’re not. They’re man-made, and competitive sports have long been a tool for keeping them in place.

This might be my first time ever saying it: kudos to The Root for running this piece. (Although I noticed that the editors removed the comment section that was up earlier. Reminds me of something else…)