Home » Browse PostBourgie » 'The Work Goes On, The Cause Endures, The Hope Still Lives, and the Dream Shall Never Die.'

'The Work Goes On, The Cause Endures, The Hope Still Lives, and the Dream Shall Never Die.' 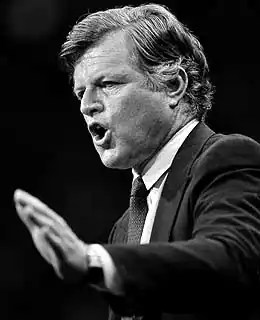 Even a partial listing of the major bills in whose passage Kennedy has played a part is impressive. Whether you admire them or not, these are the measures that transformed—mostly liberalized—America in our time: the first Immigration Reform Act; the Voting Rights Act and its extensions; the Freedom of Information Act; the Gun Control Act; the Campaign Financing Reform law; the Comprehensive Selective Service Reform Act; the Eighteen-Year-Old Vote law; the Occupational Safety and Health Act; the War on Cancer bills; the recodification of federal criminal laws; the Bilingual Education Act; the Fair Housing Acts; the Age Discrimination Act; the Airline and Trucking Deregulation bills; the Job Training Partnership Act; the South African sanctions; and the Grove City Civil Rights Restoration Act.

Far more than either of his brothers, who were lackluster senators, Kennedy, over the past three decades, has been responsible for changes in the complexion of this country and in the lives of its citizens. He has been an ally of blacks, American Indians, the poor, the sick, the aged, the mentally ill, starving refugees worldwide and immigrants. He has been an outspoken liberal, unafraid to take the controversial positions—on issues such as busing, abortion, gun control, the Vietnam War (late but forcefully), the nuclear freeze and capital punishment—that other senators clearly avoided.

In a rare moment of irritation with the American Civil Liberties Union, the senator once said, “The ACLU thinks that it defines liberalism in the country. *I* define liberalism in this country.”

UPDATE: blackink has a good roundup of links.