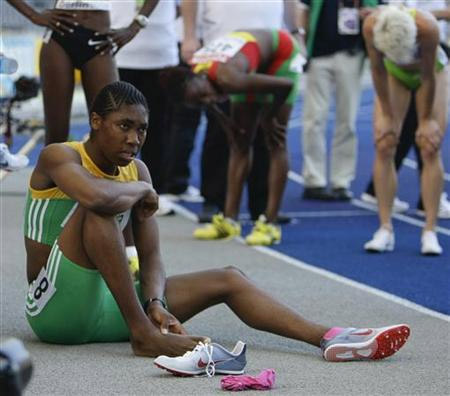 The androgynous looking South African runner Caster Semenya has been ordered to prove her gender by the International Association of Athletics Federation:

The verification requires a physical medical evaluation, and includes reports from a gynecologist, endocrinologist, psychologist, an internal medicine specialist and an expert on gender.

South Africa team manager Phiwe Mlangeni-Tsholetsane would not confirm or deny that Semenya was having a gender test, but said “there was no cheating on our part.”

“We entered Caster as a woman and we want to keep it that way,” Mlangeni-Tsholetsane said. “Our conscience is clear in terms of Caster. We have no reservations at all about that.”

Bloggers at The Science of Sport suggest that this was a foreseeable problem which should have been addressed by Athletics South Africa* much earlier:

The fact of the matter is that these allegations are not new. They have followed Semenya for a few years. Therefore, there was ample time to verify sex (again, a difficult process) and clear the way for her to compete. There is no doubt however, that the question was always going to be raised in Berlin, that people would ask and scrutinize, and so good management and coaching would have seen this resolved BEFORE the Championships even began. Because it was not, we are sadly seeing that Semenya will be the loser in what might well become an ugly story. There is surely nothing more offensive than the question of a woman’s sex – even a doping accusation does not come close.

What I’m curious about — and haven’t seen an answer to — is why these accusations have been following Semenya. Is it her appearance? She is muscular, but no more so than, say, a Marion Jones. The difference may be that Jones can be considered traditionally ‘pretty,’ while Semenya has much more masculine features. Or is the problem her performance? Semenya has greatly increased her personal best in the 800m, by seven seconds in the last year.

Thoughts? Do any of you follow track and field closely enough to have some insight?

*Which, by the way, is running a story titled: “Caster Semenya’s Fairytale Continues” on their home page.

UPDATE. Anna at Jezebel delves into the whys (hint: ‘she looka like a man’ seems to be the problem here. Also, she doesn’t like boys that way. And, as we all know, gender is determined by one’s sexual orientation.):

It’s true that if gender testing is something that athletes only have to undergo if other people raise suspicions — and if those suspicions are only raised when an athlete is “too good” to be female — then the process is hardly fair. The tests were once required of all female Olympians, but the process was discontinued because it was too invasive. This points to the great difficulty of determining “gender” in a lab in the first place — but if officials are going to try it, don’t they need a better basis than whether someone “looks like a man?” And what happens if Semenya is found to have an intersex condition? Is it fair to ban all intersex athletes from competition? A woman with, say, more testosterone in her body might have a competitive advantage, but women produce different amounts of testosterone naturally, and women with long legs have an advantage too. All this points, as we mentioned yesterday, to the need for a clear definition of gender in sports and clear standards for determining it — both of which are difficult because gender itself is much more fluid than the concept of “gender testing” would imply.