Some Disjointed Thoughts on Blackface, ‘Coonery,’ and Hip Hop Fogeyism. 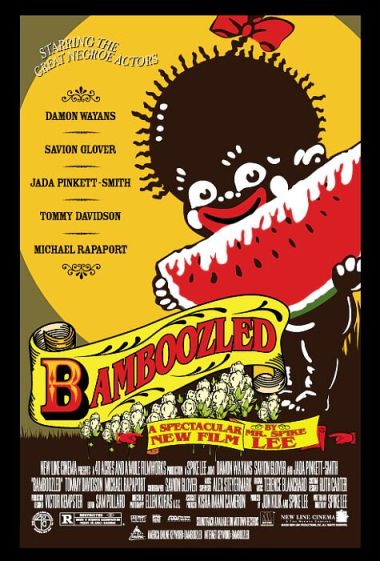 I’m probably gonna get pilloried for this by some folks, but I don’t care much for Spike Lee. Yeah, he’s talented and a pioneer and Do The Right Thing rightly deserves the praise it’s accorded. But the quality of his work varies too wildly, there’s a weird misogynistic streak in many of his films, and he’s way too hamfisted a lot of the time. (His endings are particularly egregious.)

That last bit is especially true of Bamboozled. Up until the inexecrable Crash and 2007’s putrid Angelina Jolie vehicle* Wanted, it was almost certainly the most supremely shitty movie I’d ever paid money to see.**

There are a lot of reasons that movie didn’t work — yes, Damon Wayans does speak that way for the entire film — but Bamboozled‘s most insurmountable shortcoming was its central device: the director’s employment of blackface. This is a lazy move, and sort of like comparing a political opponent’s policy prescriptions to Nazism; useful in getting the people already on your side to whoop and amen, but toxic to any discourse with the unconvinced. What Spike was trying to say (I think?) is that black folks play a major role in dehumanizing media portrayals of black life/lives. Fine. That’s a little simplistic and broad, but okay. That idea could be a jumping-off point for an interesting conversation. But Spike, as always, prefers to kill his ants with sledgehammers, and so we get a media critique featuring black tap dancers in blackface before rabid fans who are also in blackface  and an oleaginous white TV exec who enjoys emasculating his black underlings. (Also, people feel guilty and get shot at the end.)

This is too much even for Spike, which makes me think that the near-constant presence of blackface in Bamboozled just sets the movie’s baseline for provocation so absurdly high that the volume on every other dramatic element in it had to be turned up to 10 so as to not be completely drowned out.

Back in May, Spike even put a name to his charges about regressive black imagery: Tyler Perry.

Each artist should be allowed to pursue their artistic endeavors, but I still think there is a lot of stuff out today that is coonery and buffoonery. I know it’s making a lot of money and breaking records, but we can do better. … I am a huge basketball fan, and when I watch the games on TNT, I see these two ads for these two shows (Tyler Perry’s “Meet the Browns” and “House of Payne”), and I am scratching my head. We got a black president, and we going back to Mantan Moreland and Sleep ‘n’ Eat?

This is a charge often leveled at Perry, but any closer examination reveals how ill-fitting that label is — particularly the Making Us Look Bad In Front of White Folks component. Perry has built his name and fortune by largely eschewing white audiences and approval; his fanbase was once exclusively black, and after the success of Diary of a Mad Black Woman, it’s still overwhelmingly so. Perry’s works are broad and bawdy, sure, but they’re also moralistic and emphasize the importance of family. I’m no Perry fan — he shares Spike’s aversion to subtlety and his messaging around gender is often pretty gross — but the “coon” epithet as it applies to Perry always struck me as less about the racial implications of his oeuvre and more about the perceptions about the role of class in its consumption.

”Tyler Perry understands that much of his audience is African-American women — the most ignored group in Hollywood — so he’s doing movies that speak to them,” Bogle says. ”You could see these films as parables or fables. There’s a black prince figure who shows up for black women who’ve been frustrated, unhappy, or abused.” That’s the real reason critics don’t like Perry’s movies, says Nelson George: They’re made for churchgoing, working-class black women, not urban hipsters (or tenured professors). ”Tyler Perry speaks to a constituency that is not cool,” George says. ”There’s nothing cutting-edge about the people who like Tyler Perry. So, for a lot of other people, it’s like, ‘What is this thing that’s representing black people all over the world? I don’t like it. It doesn’t represent me.”’

It’s really, really difficult to extricate social location from charges  of “coonery.” It’s a cousin of “ghetto” in a way — an epithet about propriety cloaked in ostensible concern about racial uplift. And its use raises some interesting questions about which stories about black lives deserve to be told.

Which brings us to this “PSA” that was released last week:

First, let’s note the delicious irony of a millionaire rapper who has been on a major label since his teenage years — and whose hits include “You Owe Me” and “Oochie Wally“—  criticizing big corporations for ruining hip-hop by putting out idiotic, insulting music. If you already believe Nas’ and Nick Cannon’s (!) bizarre assertion that hip-hop — the dominant culture of youth expression on the planet — is dangerously imperiled, then it doesn’t much matter who or what exactly they’re criticizing. Those minstrels could be stand-ins for any rapper you wanted them to be, which makes this a pretty useless critique. Sort of like Bamboozled.

A lot of this is fogeying on the part of Nas, who is creeping into middle age and clearly frustrated with a musical form that’s changed dramatically since he first became a practitioner/listener. But he’s just doing what a lot of oldheads do, installing themselves  as sage arbiters and policing their realms for affronts to purity/authenticity. (Think John Wooden’s deep-seated dislike of the slam dunk.) This tendency toward tut-tutting is especially pronounced in hip-hop, where authenticity is currency and everyone is clamoring for some romanticized bygone days, even though the people from those bygone days were waxing nostalgic themselves. On his stellar album from 13 years ago, DJ Shadow produced a track called “Why Hip-Hop Sucks in ’96” (punchline:”… it’s the money.“) Presumably, he wanted a return to 1993, when the Lords of the Underground lamented the ascendance of radio-friendly (and apparently insufficiently masculine) existential threats to hip-hop like P.M. Dawn and Me Phi Me in “Keep it Underground.” Or maybe it was ’92, when EPMD warned the music industry to “Keep the Crossover”? I suppose they were lamenting the “realer” days of the mid-1980s.

*Is there any other kind?

** More evidence of the Pinkett-Berry effect at work?