Maybe I’m getting old, but given the bullshit that’s passing for R&B these days, I’m ready to declare the late 80s/mid-early 90s the new golden age.  Today I’mescaping from the absolute utter madness of what has become my everyday life enjoying some me-time, and have a playlist of NJS stuff (defined here if u need it, for some odd reason) that I’ve been playing while I get my uber-feminine girlness on, and I noticed… there was a lot of ridiculous stuff that happened in/with/concerning these songs and their artists.  I made mental note of a short list, and in no particular order the winners are (this will be a long one, but at least it will be full of good music for u to listen to):

I don’t care who you are, it just don’t make no damn sense.  AWESOME singing voice: full, rich, powerful.  I still wish she was recording today.  And maybe she is and I just don’t know it.  Don’t blame me, blame the machine.  At any rate… she sounds like a little kid and I just dont understand it.  I thought for the longest that we were being Mili Vanilli’d again, but nope.  Real deal.

I found this interview on Youtube and even I can’t say with full confidence that her speaking voice hasn’t  been edited.  I mean I know it’s high and insanely squeaky but even this seems a little too much.  But in the vid that follows, the one for her song ‘Nicety,’ I can say for sure that the speaking she does there (check the 0:55 and 1:30 marks) is actually her.

Fun fact:  she has a daughter fathered by the notorious, batshit Suge Knight.  This means that she had sex with suge knight.  And survived!  She’s also suing him for child support.  Takes a real woman with huge balls to do either of those things successfully.

omg.  When I was younger I wanted to be a singer when O grew up, and I used to sing Brownstone’s song’s HARD, like I wrote them myself and would spontaneously combust if I did not scream them as loudly as I could at least once a day. I love them.  gorgeous voices, awesome songs.  and pretty!  Those girls were gorgeous!

But damned if the lead singer couldnt yawn and inhale a Mac truck.

Alright, so I’m all for people bettering their lives, cutting out toxic people and things, gettin’ off crack, and all that jazz.  But I’ve said this here before, and though it sounds harsh, I stand by it:  sometimes i wish we had cracked-up Mary back.  It’s true!  I do!!   Man, im sorry, but there ain’t no Mary J. Blige like What’s the 411?/My Life Mary J. Blige.  I happen to think that as a singer she’s just okay, but back then she was sangin. As well as she ever has.  Now?  Bleh.  She’s all happy and sunshiney all the damn time.  Sometimes you want some grit!  some pain!  The kind of grit and pain that only crack and lookin at this man everyday can give you!

I LOVE THIS DAMN SONG.  See?  Sometimes you just need to hear about that kind of crazy, obsessive, self-destructive love.  Happy Mary is runnin’ ’round with broom-straw wigs, makin’ up words like “dancery” and “holleration” and doin’ silly wheelchair dances (1:59 mark) in her videos.

(disclaimer: I really am glad she ain’t killin’ herself no more, I just want her to be happy, yaddah yaddah, blah blah.)

If this song is included in the New Jack Swing era, it’s coming in on the tail end.  In 1995, a very young, nubile 702 teamed up with an equally young Subway to sing a song called ‘This Little Game We Play.’  Allow me to share some of the lyrics with you:

So.  As earlier stated, this song was written by Gerald Levert.  When the song came out, lead singer Kameelah Williams was 17 years old, and the youngest girls in the group, twins Irish and Orish, were 15.  I’m not sure how old the guys were but… does it really matter?  It’s already creepy beyond comfortability. And when you watch the video, those little tiny faces in the midst of all that pubescent grinding and thrusting… just gets creepier.

Bonus ridiculousness:  the note that our lead singers hit at the end of the extended version of the song, around the 4:15 mark.  ….No.

omg.  I was SO IN LOVE with Garfield from Shai, so much so that i put his picture up here and said ’screw the rest of the group!’  I admit, this was in the midst of my lightskinned-man phase.  He was just so fine, all golden brown and shimmery under that ill-advised 90s s-curl.  YUM!  So naturally, I was a big fan of their music, and luckily, they actually made some really good stuff.  If we’re the same age, then this is the song that all the lil boys who thought they could sing sang in all your middle school talent shows.  It;s still one of my favorite songs originally performed by a group that i enjoy singing by myself (”AAAAAND IFFF I EEEEEV–eveeeeer fall–IN LOOOOOVE A–agaaaaaiiiiiin).

Tell you what, though: get me in a hotel room alone with Garfield today with this song playin in the background and id get down to it just like some barry white.

Unfortunately, I can’t find the remix on youtube, but you can listen to a snippet here.

6.  aaron hall’s ‘don’t be afraid’:  inappropriate from beginning to end.

This pretty much speaks for itself.  I will supply excerpts of the rapiest lyrics and a  link to the song.  You may supply your own outrage/disgust/’wtf’ faces.

When I lay you down tonight
Ask me to hold you tight
Everything will be alright
Don’t be afraid, baby
When you start to spread some home
And your parts are gone, gone
Let it happen right now
Don’t be afraid, girl

(wait… when my parts are gone??  WHERE ARE MY PARTS GOING?!)

It doesn’t get any better from there.

Y’all remember that song ‘here we go again’ by Portrait?  Bangin’ song, right?!  But what are they talkin abt in the middle of it?

Climb a mountain (what mountain)
Swim a sea (what sea)
See what I mean? (no)
I don’t know but I don’t want to get too deep
Oh oh oh…
Here we go again

Blu Cantrell (heh!  remember her?) once said that she makes those weird faces when she sings because singing is not a pretty art (um, excuse me but my beautiful boo Garfield and I will disagree with you there). Sometimes it’s rough and gritty and can contort your face just as it can contort your soul (but Jennifer Holiday agrees here).  Maybe that’s why Johnny Gill made them faces he did?

I happen to think that he just has wonky lips that he can’t control very well.  Whatever the case, they are ridiculous all the same. 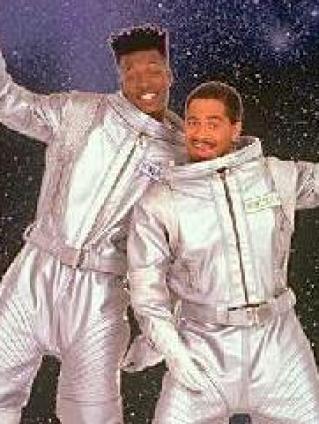 This really doesnt have anything to do with music aside from the fact that Shanice, as we should all know, had some bangers in the New Jack Swing era.  It also wouldn’t surprise me if nobody else gave a damn about  this, but it’s important to me because I have a severe dislike of Flex, the man she married.  I just can’t look favorably upon someone who consents to being part of a show called ‘Homeboys in Outerspace.’  It’s just like the way I blacklisted the entire cast of Soul Plane in my life (except for you Kevin Hart.. i dont know how you escaped, but somehow you survived and are still in my good graces).

And to finish off the list, I’d like to put on display for you my own stupidity.  The song ‘Weak’ by SWV was one of my faaaaaaavorite songs ever.  I even loved the knockoff version that my local radio station did as a promo (thaaat explains why i loooooove WGZBeeeeee!).  But as I grow older and look back on all these songs, I’m noticing that in a lot of the stuff i used to sing… I didn’t know what the blue hell the artists were saying and have, for a good decade, been singing the wrong words.  ‘Weak’ is one such song.  The part where Coco sings ‘Resistance is down when you’re around/Pride’s fading?’  remember that?

I thought she said:

‘Resistance is down when you’re around/Christ baby’