Another Monday, Another Terrible Douthat Column. 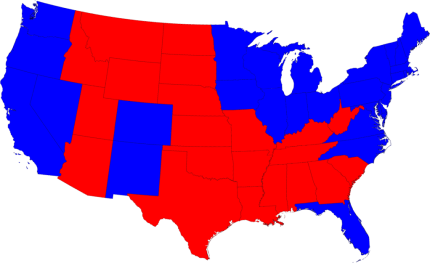 My Monday morning was bound to be something of a disappointment; after all, I was in an unusually good mood for most of this weekend and it’s pretty difficult to sustain that kind of high into the work week.  Of course, I probably didn’t do myself any favors by starting my day with another poorly reasoned column by Atlantic alum and affirmative-action hire Ross Douthat.  This week, Douthat wants to argue that President Obama ought to temper his “blue-state agenda” with the recognition that the recession has (at least partially) revealed the failures of “blue-state governance” and the successes of its red-state counterpart. Here’s Douthat in his own words:

Consider Texas and California. In the Bush years, liberal polemicists turned the president’s home state — pious, lightly regulated, stingy with public services and mad for sprawl — into a symbol of everything that was barbaric about Republican America. Meanwhile, California, always liberalism’s favorite laboratory, was passing global-warming legislation, pouring billions into stem-cell research, and seemed to be negotiating its way toward universal health care.

But flash forward to the current recession, and suddenly Texas looks like a model citizen. The Lone Star kept growing well after the country had dipped into recession. Its unemployment rate and foreclosure rate are both well below the national average. It’s one of only six states that didn’t run budget deficits in 2009.

Meanwhile, California, long a paradise for regulators and public-sector unions, has become a fiscal disaster area. And it isn’t the only dark blue basket case. Eight states had unemployment over 11 percent in June; seven went for Barack Obama last November. Fourteen states are facing 2010 budget gaps that exceed 20 percent of their G.D.P.; only two went for John McCain. (Strikingly, they’re McCain’s own Arizona and Sarah Palin’s Alaska.) Of the nine states that have raised taxes this year, closing deficits at the expense of growth, almost all are liberal bastions.

As is the case with nearly every one of his columns for the New York Times, Douthat has ignored virtually every other piece of context to build a case which proves far too much.  Take the California example, for instance.  The takeaway is supposed to be that California’s aggressively liberal policy choices are to blame for its current fiscal woes, which would make sense, if California’s institutional arrangement were similar to Virginia’s or Massachusetts’.  Of course, most of us know that that’s not the case.  Institutionally, California is a morass of dysfunction; the state’s calcified Republican minority and absurd budgetary rules (which require a super-majority to raise taxes) make it virtually impossible to raise revenue in anything approaching an adequate amount.  In that kind of an environment – and with the economy being what it is – California would be in fiscal trouble even if it weren’t a blue-state.  And it’s simply disingenuous for Douthat to pretend otherwise.

More generally, the same goes for the apples-to-apples comparison Douthat makes between blue states and red states.  Yes, of the eight states with unemployment rates over 11 percent, seven went for Barack Obama.  But of those states, several – like Michigan and Ohio – have been reeling from the twin blows of manufacturing decline and economic collapse.  Again, even if they were governed like Texas or Oklahoma (which has a similarly “low” unemployment rate), it’s still the case that they would have been hit particularly hard by the recession.  Of the blue states facing significant 2010 budget gaps, most have populations significantly larger than most red states, and accordingly, have far larger unemployment, Medicaid and educational obligations, each of which feed into the budget gap.  To put this horse out of its misery (and then beat it), this would be the case even if they were governed with a Rick Perry or Bobby Jindal level of fiscal stinginess.  That’s not to say that their policy choices have nothing to do with their current plight, but to say that – contra Douthat – they aren’t the key explanatory factor.

Honestly, insofar that I’m bothered by Douthat’s column, it has less to do with his utter disregard for context and everything to do with his sheer callousness. In our system, most of the burden of providing a “safety net” falls on individual states.  While this works fine in expansionary periods, it is an utter disaster in times of recession where states have to fulfill their budgetary obligations by cutting services at exactly the time they’re needed most.  Indeed, the only way to get around this is by following the Texas model of governance and simply forgoing any serious investment in said social net, so that when a recession hits, balancing the budget isn’t nearly as difficult.  Of course, the practical effect of this is to leave the most vulnerable Americans hanging in the wind (which Texas has done).  Not only does Douthat approve of this, but he thinks that – in the midst of a serious recession – we should export it to the rest of the country via federal policy.

And there, ladies and gentlemen, is your compassionate conservatism at work.