Home » Browse PostBourgie » Book of the Month Discussion: Whatever It Takes by Paul Tough.

Book of the Month Discussion: Whatever It Takes by Paul Tough. 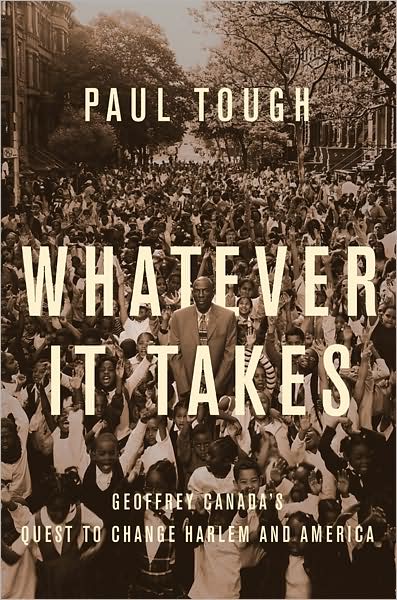 I’ve been chomping at the bit to get to our discussion of Paul Tough’s Whatever It Takes, this month’s reading/discussion group pick. The book follows the efforts of Geoffrey Canada and his audacious Harlem Children’s Zone program, a formidable array of proactive social programs that Canada hopes will lift every child in Harlem into college and out of poverty. The scale of that undertaking is mind-bending, but Canada is undaunted, maybe even obdurate, in the pursuit of that end.

Canada launches Baby College in an attempt to instill some of the childrearing methods that middle class parents use, citing a growing body of research that child-rearing strategies play a major role in the black-white achievement gap. And most notably, he opens a charter school, The Promise Academy, to great fanfare and lots of press attention. Promise Academy boasts an unusually engaged faculty and stresses parental involvement, and its inaugural elementary school class is full of kids who have been cultivated by the HCZ’s early childhood programs. They have longer class days and longer school years and thanks to some sponsors with deep pockets, lots of resources at their disposal.

The inaugural sixth grade class is a different matter. Those kids didn’t go through the suite of HCZ initatives, and by the time they arrive at the academy, they are already way behind other sixth graders in reading and math. Canada bumps heads with his principal on their approach to reaching these kids, whose academic performance will factor heavily into the academy’s long-term viability.

Canada’s efforts and ideas are often crazy inspired (and inspiring), even if the practical application of them often left me personally a little frustrated. Tough’s a sharp, clear writer, who does a great job of outlining Canada’s remarkable life story — from poverty in the South Bronx to a post-grad degree at Harvard — while showing how Canada’s considerable force of personality was both necessary for the HCZ’s launch and an occasional encumbrance to its progress.  The (perhaps unavoidable) emphasis on standardized test scores was also very grating, though I’m inclined to think had something to do with the business types who were underwriting the school needing some sort of metric to gauge how the school was doing, even if that metric left a lot to be desired.

I know y’all have a lot to say on this one. The floor’s open.

(Also, if you haven’t already, you should really holler at the “Going Big” episode of This American Life, in which Tough reports on HCZ’s Baby College — and its emphasis on concerted cultivation and not spanking children as a necessary step in shaping them into better students.)