The Uncertain Future of the Voting Rights Act. 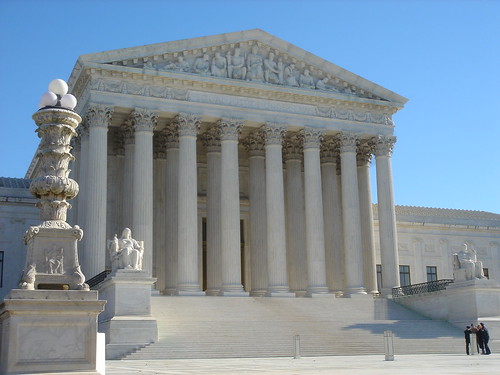 You can’t really read the decision in NAMUDNO v. Holder, the closely watched voting rights case that the Supreme Court decided on Monday, and miss how ambivalent the language is in the Justice Roberts’s majority opinion, which leaves a key portion of the landmark Voting Rights Act (mostly) untouched. The majority opinion in the 8-1 decision (Justice Thomas dissenting) basically pointed out how constitutionally flimsy the VRA is, before ruling on the case on statutory grounds. Indeed, the opinion could be read as a either a punt on the constitutional issue — or a warning to Congress to fix the VRA before another strong case forces the court’s hand.

The case centered around Northwest Austin Municipal Utility District Number One (NAMUDNO), a political jurisdiction of about 3,500 people in Texas. NAMUDNO  wanted to change its polling locations for local elections from private homes, where they’d traditionally been held, to some other public spot. But Section 5 of the VRA, which was installed to make sure sure that certain jurisdictions with a history of discriminatory practices aimed at keeping black people from voting (literacy tests, etc.) requires that any changes to election procedures in those jurisdictions first need an OK from the Justice Department (or “preclearance.”) NAMUDNO doesn’t have a history of racial discrimination, but Texas is one of the jurisdictions required to get preclearance, and so NAMUDNO also needed to by default. NAMUDNO filed suit for relief under the  “bailout” provision (which allows jurisdictions to get out from under the preclearance rules if they meet certain conditions)*;  the district also argued that if  Section 5 would not allow it bailout, then it was unconstitutional.  But the district court said bailout was only available to localities that register their own voters — NAMUDNO does not — and denied their request on both counts.

They finally appealed to SCOTUS. The high court granted NAMUDNO bailout, but decided not to touch the issue of Section 5’s consitutionality — but not before basically calling Section 5 everything but unconstitutional. Justice Thomas’s dissent isn’t even that far from the majority opinion;  he really just wanted to force the constitutionality issue. (Which isn’t too surprising; Justice Scalia, the court’s conservative firebrand, once said that Thomas “doesn’t believe in stare decisis, period.”) Thomas goes on to deftly lay out the sordid history of white folks disenfranchising black folks with violence, intimidation or moving the chains, before saying that the conditions that fueled Section 5’s creation are not the conditions that currently exist.

This is not to say that voter discrimination is extinct. Indeed, the District Court singled out a handful of examples of allegedly discriminatory voting practices from the record made by Congress. … But the existence of discrete and isolated incidents of interference with the right to vote has never been sufficient justification for the imposition of §5’s extraordinary requirements. From its inception, the statute was promoted as a measure needed to neutralize a coordinated and unrelenting campaign to deny an entire race access to the ballot. … The burden remains with Congress to prove that the extreme circumstances warranting §5’s enactment persist today …. An acknowledgment of §5’s unconstitutionality represents a fulfillment of the Fifteenth Amendment’s promise of full enfranchisement and honors the success achieved by the VRA.

It’s pretty easy to call bullshit on that, obviously.**  (The Michigan voter I.D. debacle springs to mind.) But you could read Thomas’s dissent as the true feelings of a cautious court. Either way, there’s no doubt here that Section 5 is in need of some serious tweaking. The optics in this case were bad —  some tiny hamlet with no record of wrongdoing has to petition all the way to the Supreme Court just to get permission to move its voting machines to the local high school or whatever. And the court is clearly not enamored with the statute as currently constituted, so it’s not clear that it would survive another serious constitutional challenge. Stay tuned.

*It’s also worth noting that few jurisdictions opt for bailout, and even fewer bailout requests are granted. Write professors Stephen Ansolabehere and Nathaniel Persily: “The rarity of bailout is somewhat of a mystery. Perhaps the criteria for bailout are too difficult or politicians are loath to make their cause célèbre the escape from a civil-rights law. Or perhaps, as many of the covered jurisdictions have indicated, they prefer to be covered because it gives them a DOJ stamp of approval for their voting laws that they can wave in the face of those who otherwise might sue them.”

**Sherilyn Ifill on Thomas’s dissents in civil rights cases: “Thomas knows that as the lone black justice his views about race will garner particular attention. He painstakingly sketches the history of racial discrimination…It’s always a compelling read. But it’s a setup for his dissent. The punch line is always ‘that was then, this is now.'”