Race and the Full Court Press. 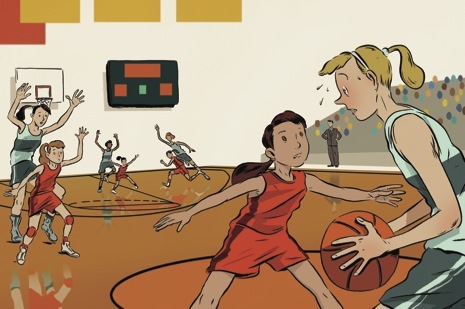 Malcolm Gladwell has caught a lot of flak for his piece last week on how underdogs win, and perhaps rightly so. His central point, though — that the outgunned can have a fighting chance at success if they ditch convention and play to their strengths — is one worth considering, and given the resilience and tactics of the insurgencies in Afghanistan and Iraq, is a topical one, too.
But in making his point, he goes to some weird places. The framing device for this story is a not-particularly-talented eighth grade girl’s basketball team at Redwood City in the Silicon Valley. There are only two decent players on the squad, and their coach is a TIBCO software executive named Vivek Ranadivé, an Indian emigré who had never seen or played basketball before he arrived in the States. The upshot of that background is that he didn’t have any preconceived notions about the right way to play basketball. So instead of having his players run back on defense after a score or an opponent’s rebound and wait to be picked apart by more skilled players, he instituted the full-court press. His team proceeded to beat up on and frustrate teams with better players, and found themselves in the national championship game. Obviously, the press can make up big gaps in talent.*
But one of the things that raised the eyebrow of my blogmate and fellow sports junkie blackink was the problematic way the Redwood City Girls were described, versus the way their ‘talented’ opponents were characterized.

“My girls were all blond-haired white girls,” Ranadivé said. “My daughter is the closest we have to a black girl, because she’s half-Indian. One time, we were playing this all-black team from East San Jose. They had been playing for years. These were born-with-a-basketball girls. We were just crushing them. We were up something like twenty to zero. We wouldn’t even let them inbound the ball, and the coach got so mad that he took a chair and threw it. He started screaming at his girls, and of course the more you scream at girls that age the more nervous they get.” Ranadivé shook his head: never, ever raise your voice. “Finally, the ref physically threw him out of the building. I was afraid. I think he couldn’t stand it because here were all these blond-haired girls who were clearly inferior players, and we were killing them.”

Let’s not touch the half-Indian bit right now. But the other part speaks to a very old, very insidious meme in the sports world, and basketball in particular: Black players are natively talented, and white players work hard and play smart. This is in no way a compliment to black folks, of course, what with its insinuation that black athletes are lazy, dumb, and possessed of some kind of peculiar physicality. But the idea is so much a part of the way sports are discussed in America that people will try to shoehorn reality into it.**
Gladwell didn’t utter those sentences, but he left the quote in, which has the regrettable effect of perpetuating this problematic racialized shorthand. Ranadivé’s quote also downplays his own girls’ considerable  advantages in terms of resources; their fitness consultant was Roger Craig — a former NFL Pro Bowler with the San Francisco 49ers who still runs marathons.

“It’s an exhausting strategy,” Roger Craig said. He and Ranadivé were in a TIBCO conference room, reminiscing about their dream season. Ranadivé was at the whiteboard, diagramming the intricacies of the Redwood City press. Craig was sitting at the table.

“My girls had to be more fit than the others,” Ranadivé said.

“He used to make them run,” Craig said, nodding approvingly.

“We followed soccer strategy in practice,” Ranadivé said. “I would make them run and run and run. I couldn’t teach them skills in that short period of time, and so all we did was make sure they were fit and had some basic understanding of the game. That’s why attitude plays such a big role in this, because you’re going to get tired.”

In short, these “little blonde white girls” may not have been better basketball players than their opponents, but they were better conditioned and fitter; they were, in the end, better athletes. But that narrative is a much harder sell.
*Within reason. It can be run effectively on the college level, but a deep team with good ballhandlers could easily beat it. It would be near impossible to employ full-time on the pro level; the NBA season is nearly three times as long as the college season, and even the tallest NBA players are competent enough dribblers and passers to break the press.
Gladwell uses Rick Pitino, the head coach at Lousiville to expand on his point about the press’s virtues. Pitino became a die-hard disciple of the press when he was a benchwarmer on a Dr. J-led UMass team that got their asses handed to them by a far less talented Fordham team using the press. Gladwell writes, somewhat disingenously, that Pitino won national championships on the college level with teams have didn’t boasted the kind of talent that goes on to become NBA stars.

College coaches of Pitino’s calibre typically have had numerous players who have gone on to be bona-fide all-stars at the professional level. In his many years of coaching, Pitino has had one, Antoine Walker. It doesn’t matter. Every year, he racks up more and more victories.

‘All-Star’ is the key phrase there. Not to put to fine a point on it, but even a marginal NBA player is a few orders of magnitude better than a very good college player. A  good college team might have one NBA prospect on it. A great college team might have two or three. What Gladwell conveniently left out is that Pitino’s 1996 Kentucky Wildcats team that won the national championship boasted an astounding nine players that went on to play in the NBA. They were absolutely loaded.

Wondering what it look like when a team full of future pros runs Pitino’s press? It ain’t pretty.
Underdogs, my ass. Gladwell knows his sports, so we can only assume that that elision was intentional. And his team was so laden with talent that it would have been dominant, press or no.

**Scouting projections regularly compare white players to other white players , even when their games/physiques/builds are not that similar. And of course, for a very long time, black quarterbacks would be switched to other positions once they got to the pros, because they were so “athletic” and their “talents” would be better used at, say, wide receiver.