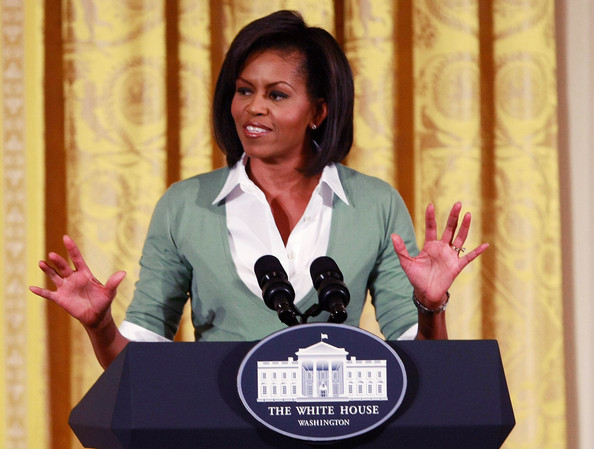 The Field Negro, on Michelle Obama’s recent comments that she was teased for speaking like a white girl:

First, there is no such thing. Either you speak clearly or you don’t. … people have accents, and we all speak in different ways.The important thing is that we speak well, and in a way that can be clearly understood by whoever is listening to us. Now unfortunately, some of my cousins, well…..it’s almost like they don’t want the person listening to understand. Unless you are in on the secret slang, you don’t deserve to understand what the speaker is saying. For some of us, it’s our own way of communicating that might as well be a totally different language. When our children grow up speaking like this it’s tough to get them out of it. And damn it, the shit can be embarrassing when they reach adulthood. If I have to strain to understand the conductor on the train, or the person taking my order at the fast food restaurant, that’s a problem. Especially when they are supposed to be speaking English. I am not talking about an accent here, I am talking about putting words together that just don’t belong. Just what the hell does, you be done messed up, mean? YOU. BE. DONE. MESSED. UP. That is not English, that is some kind of ghetto Morse code that will get you nowhere in school.

Field’s frustration is a common one, but so is his misunderstanding of black English. Speaking Ebonics — or African American Vernacular English, as linguists call it — doesn’t mean one speaks improperly; the speaker is simply using a dialect that is different from Standard American English, and one that has specific grammatical rules. (When Field grits his teeth at the supposed usage of ‘you be done messed up’,  he’s almost certainly misquoting the supposed speaker: the ‘to be’ verb would actually be implied in that sentence, so the grammatically correct way to say this sentence in Ebonics would be ‘you done messed up.’)

His assertion that people speak Ebonics (which he may erroneously be conflating with slang, but I can’t tell) in a deliberate attempt to be unintelligible to outsiders goes a bit far, I think. Or at least, it’s a claim that’s not specific to Ebonics. All dialects necessarily reinforce the in-group/out-group dynamic, and facility in a certain dialect comes with subtle but powerful advantages in the context in which it’s spoken. Take this nugget from a conversation yesterday with my co-blogger universeexpanding, a West Indian who lives in St. Vincent and the Grenadines but has studied for long stretches in Canada and London.

Today I had to go into the market. I didn’t want to get overcharged, so I deliberately thickened up my accent to mark me as local because my personal style and usual speech don’t.

(Since y’all can’t hear it: UE’s ‘normal’ accent has a vaguely British lilt to it, but she can lapse into an impenetrable patois — to my ears, at least — and manage a pretty good Cockney. To code-switch as effectively as she does required prolonged and meaningful exposure to different social milieux, and it’s a skillset she developed out of necessity to navigate those spaces.)

But what if she couldn’t do that? I remember watching a documentary on poor black women trying to escape poverty (the name of which escapes me). The women were being taught job interviewing skills, and I remember hearing snickering at one woman’s performance during her mock interview. She wasn’t trying to bomb the interview, although that’s what was happening. What she was doing was applying the cultural and linguistic skills that had served her in the past — an informality and  exaggerated familiarity — that was misplaced in this context. She did not have access to the linguistic (and thus social) skills that would mark her as an insider, and the mock interview, with its follow-up critiques from the instructors, was a way to teach them to her to improve her chances.

So it is with Fields’ train conductor, whom he  chides for not speaking ‘properly.’ What’s really happening is s/he’s not speaking properly for that context. Field seems to think that speaking this ‘lesser’ English in this setting is a personal failing, a sign of the wielder’s linguistic (and moral?) profligacy. It’s not. It’s just another stand-in for socioeconomic class,  a likely indicator of the access and opportunity possessed (or not) by the speaker.

Okay. Onto Ms. Obama’s original comments. This might get me into a bit of trouble. I’ve complicated ideas on the notion of ‘talking white.’ I think it’s a real phenomenon, and one that has nothing to do with silly, oft-repeated assumptions about a lazy aversion to speaking ‘properly’ or SAE. The clerk at the Vitamin Shoppe that I hit up on the way back from my gym is a dark-skinned black girl who speaks with hard vowels and peppers her speech with ‘like’; she sounds like a Valley Girl. To my ears, she sounds ‘white’, but I’d never suggest she sounds ‘proper.’ On the other hand, there are people like, say, Michael Eric Dyson. Leaving aside his penchant for grandiloquence/ostentatious polysyllabism, his English is ‘proper’. But upon hearing his voice over the phone, few people would mistake him for white.

Yeah, yeah: there’s no one black accent. (Or white/Spanish/Spanglish ones, for that matter.) And I think the charges of whiteness leveled at Michelle Obama were not about how ‘properly’ she spoke or how well she did in school — note the insinuation of a dysfunctional black pathology here — as much as that her speaking patterns were being molded in such a way that would aid  the social mobility her parents wanted for her. But many black South Siders, who came up from St. Louis/New Orleans during the Great Migration, have Southern-sounding drawls.  Now, maybe Michelle had one before she went to Princeton, and maybe she didn’t. (She doesn’t have one now, or at least not publicly.)  If she didn’t have one, it wouldn’t surprise me that it might offend people who saw their way of speaking as familiar and beautiful, and saw her not doing so as opting out of it. It’s still not really fair, of course. But it’s a little more nuanced and whole lot less insulting than suggesting that they said it just because she was smart.