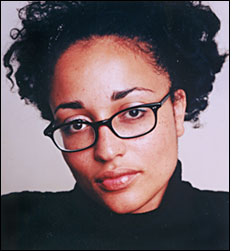 blackink: If you get a moment, or something closer to 30 minutes, please make sure to check out Zadie Smith’s penetrating essay about multiple voices and the appeal of Barack Obama. The narrative hones in on the many voices of our president, all of them authentic in their own way, culled from a life spent in places as dissimilar as Kansas, Hawaii, Indonesia, California, New York, Chicago and D.C.

Of all of the mistakes Obama’s opponents made during his ground-breaking run to the White House, perhaps the biggest – and most telling – was their attempt to portray him as some sort of phony, double-talking exotic.

Smith gets to the heart of this miscalculation: “His enemies latched on to its imprecision, emphasizing the exotic, un-American nature of Dream City, this ill-defined place where you could be from Hawaii and Kenya, Kansas and Indonesia all at the same time, where you could jive talk like a street hustler and orate like a senator. What kind of a crazy place is that? But they underestimated how many people come from Dream City, how many Americans, in their daily lives, conjure contrasting voices and seek a synthesis between disparate things. Turns out, Dream City wasn’t so strange to them.”

Right. You begin to connect the dots and understand that Obama was no fluke. His alleged weakness was really his strength, allowing him to win in places like Indiana and North Carolina – places where a Democrat, especially a biracial one, has no business picking up electoral votes. Turns out, Mark Penn and John McCain and Sarah Palin knew as much about Real America as they did about Dream City. Which is to say, nothing at all.

Also: For those with a serious basketball jones, make sure to stay up past your bedtime for Monday night’s NIT matchup between mid-major darlings Davidson and St. Mary’s. If you think contrasting styles make for the best fights, then you’ll appreciate the duel between point guards Stephen Curry and Patty Mills. Curry of Davidson is a methodical gunner and the nation’s leading scorer, while St. Mary’s Mills is a 6-foot gust of Aussie wind who nearly toppled the Dream Team all by his lonesome last summer.

shani-o: slb’s fantastic post on Jesse Redmon Fauset has inspired me to endorse a novella by my favorite writer from the Harlem Renaissance: Nella Larsen.  Her output was minimal, and though she was celebrated during the 20s and 30s, she died a reclusive nurse in 1964.  The daughter of a Danish woman and a Caribbean immigrant, Larsen was a rarity in her time (and ours): she refused to choose blackness over whiteness and vice versa.

She insisted on exploring both sides of her heritage and her work honed in on the struggle many women face, irrespective of skin color.  1928’s Quicksand is the tale of a biracial woman (much like Larsen) whose problems have less to do with race and class, and more with her inability to settle into a woman’s prescribed “place.”  Though bleak, Larsen’s work is feminist, anti-racist, and honest.

slb: I can’t believe I’m suggesting this, but Joss Whedon’s latest morally ambiguous sci-fi series, Dollhouse, which airs Fridays on Fox, has gone from a secret, guilty obsession to a program I’m actually unashamed to endorse. (Who knew?) The series, starring and co-produced by Eliza Dushku, focuses on a covert, nefarious organization that outsources “programmable people,” who can be imprinted with built-to-spec personalities. Wealthy clients request “dolls” for tasks as varied as hostage negotiation, cult infiltration, and high-end prostitution. It’s sick, twisted, and growing steadily intriguing as the episodes wear on. Get into it. (You should know going in that the first five episodes have little to recommend them, save the awesomeness of Harry Lennix, as has been documented by one of our favorite bloggers, Danielle Belton, over at The Black Snob, but I promise that if you hang in there through episode six, you will not be sorry.)

G.D.: The New Yorker sent Dan Baum to New Orleans in the immediate aftermath of Katrina, and he arrived to find a broken town that never really seemed a part of the larger America . The stories of some of the stalwarts — the dedicated, but naive marching band teacher, the closeted ex-football player who decided to reboot his life as a woman, a jumpy narcotics officer with a cowboy streak, the Ninth Ward striver with white picket fence dreams that are repeatedly thwarted — make up Nine Lives, which is alternately enraging and deeply moving. It’s full of the kind of personal dramas that would be life-defining on their own, but are made epic by the doomed backdrop on which they play out.

It’s slow going at first; Dwight Garner was initially ready to dismiss the whole book as overcooked, but he stuck it out and was rocked. “Because at about Page 65, something very real clicks…The small, stray, unobtrusive details that Mr. Baum has been planting along the way begin coming together and paying off, like a slot machine that’s begun to glow and vibrate. By the final third of “Nine Lives,” as the water begins pouring into the Lower Ninth Ward of New Orleans, I was weeping like an idiot in the coffee shop where I was reading.”

Indeed. It’s hard not to root for the folks in Nine Lives as they try to make sense of a place deep in their bones but not at all what they remembered.