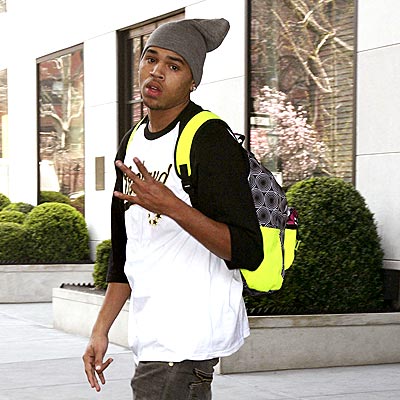 With two felony counts. The report in the court documents is gruesome:

According to a search warrant written by police Det. Deshon Andrews, the assault began when Rihanna picked up Brown’s phone as the couple drove away from a pre-Grammy party in Beverly Hills. The singer saw a long text message on Brown’s phone detailing a sexual encounter between him and another woman, the warrant said.

The pair began arguing, and Brown pulled the rented Lamborghini to the side of the road and tried to make Rihanna get out of the car, according to the warrant. When her seat belt got in the way, he began punching her in the face.

“The assault caused Robyn F.’s mouth to fill with blood and blood to splatter all over her clothing and the interior of the car,” the police detective wrote in the warrant filed Feb. 20.
During the alleged assault, the detective wrote, Brown told Rihanna, “I’m going to beat the [expletive] out of you when we get home. You wait and see.”

After Rihanna feigned a call to her personal assistant — pretending to ask the woman to have police waiting at her home — Brown became enraged, telling her, “Now I am going to kill you,” according to the warrant.

The assault escalated with Brown biting Rihanna on the ear and putting her in a headlock until she lost consciousness, according to the warrant. When she attempted to free herself by “gouging his eyes out,” the detective wrote, he bit her finger. Her screams for help were heard by a neighbor, the warrant says.

I suspect we’re in for round 3 of blame-the-victim: Rihanna, as a public figure, is now responsible for how other women deal with domestic violence situations, and is not deserving of our sympathy as she has reportedly gotten back together with Brown. Or, in the words of this completely ludicrous and insulting post at Jack and Jill Politics: “Rihanna is showing a bad example to her young fans on the treatment a young lady deserves from her partner. This is weakness not strength and courage on display. It says that violence against women is forgivable — when it is not.”

Give me an effing break. Rihanna is a young woman, just like any number of young women in difficult situations. To judge her, or to suggest (as another commenter does in that JJP post) that she doesn’t deserve any sympathy if she doesn’t immediately kick her abuser to the curb is so myopic and infuriating. It’s like the people who blame women for not reporting a rape. Every woman deserves to deal with her trauma in the best way she can. I’ve said it before, and I’ll say it again: she isn’t an object-lesson for the rest of us. Rihanna allegedly getting back together with Brown doesn’t make domestic violence appear to be okay or ‘forgivable’. It just shows how damaging and insidious it is.