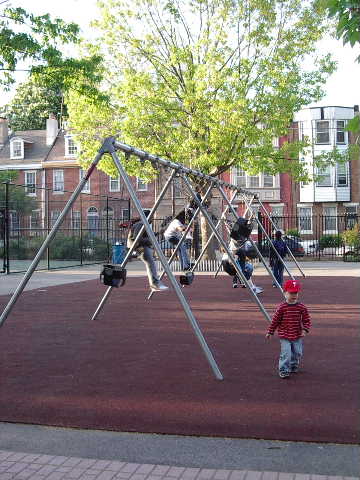 Dr. Bitch wrote a thoughtful response to Jamelle’s post on the violence that is a fact of life for so many black youth which she was gracious enough to let us cross-post.

I want to make it clear that, despite my conclusion, I don’t disagree with Jamelle at all; what started off as a “yes, as a mom, I know that kids need things to do” comment turned into a criticism of the way that “public after school programs” for “at-risk youth” are always framed as if the only reason for giving [poor] kids sports or art activities were to “keep them out of trouble.” Whereas in contrast . . . well, just read what I wrote.

You know, speaking as an upper-middle class white parent, you would not BELIEVE how much shit there is for my kid and kids in our socio-economic group to do after school: sports, arts classes, drama, “play dates,” music lessons, and on and on. I don’t sign him up for most of this stuff, and I have guilt about the lack of music lessons and playdates in his life, but I spent freaking fall semester ferrying his ass to different sports activities six days out of seven.

And of course there’s tons and tons of stuff in the media about moms like me, and how overscheduled our children are, and whether or not we “need” to work to pay for all this stuff or “need” to stay home to make sure they get ferried around, and how back in the day darn it kids just played in the street with the neighbors and they all turned out fine.

But that’s really b.s. I was in 4H, and on the neighborhood swim team at the homeowner’s association pool, and in school plays and band, and did some community theater. The main difference is that most of the stuff I did was free or very inexpensive community- or school-based stuff, whereas the stuff my kid does is all things I pay for. And since it’s not necessarily community-based, his activities usually aren’t in the nearest park or at his school like mine were.

And of course, the point I’m making here is that we as a society have pulled a lot of resources away from kids activities, not least (I suspect) because the 70s started desegregating, and people in my social class started pulling out of public schools and weren’t “comfortable” letting their kids play at public playgrounds or joining community-based programs any more–so we started paying for private schools and private lessons and getting really stingy about public funding for public schools and public goods like after-school programs.

People like me, who don’t approve of that white flight bullshit, can nonetheless suck it up and pay for the AYSO soccer program ($80/semester), the TaeKwonDo ($100/month), the fencing lessons ($200/6 weeks). And we can of course complain about what a pain in the ass is is to run our kids to these things, but at least I *can* provide them for him. If I were poor, I wouldn’t be able to.

I don’t do it to “keep him out of trouble”; I do it because it’s a way of letting him do and try things that he’s interested in and that aren’t provided at school, and because it’s not healthy for him, mentally or physically, to just sit home and play video games all afternoon. But sure, one probable side-effect of his activities is blah blah mother-son time together, blah blah increased self-esteem, blah blah it probably *will* help keep him “out of trouble” if he gets interested in hobbies and pursues them (god willing) without my help once he’s old enough to get himself places on his own.

It frustrates the crap out of me when people talk about the social problems of “urban youth” without recognizing that even with all other things being equal, the fact is that *all* kids need *something* to do after school, and that public funding for this stuff shouldn’t be about charity or “public safety”: it should be something we do because, well, because we *do things for our kids*, even if we grumble about what a pain in the butt it is. Yes, fine, public safety is a good side effect. But when we start talking about protecting ourselves (and I mean “we” as in “society, specifically the mainstream media” not “we” as in “you [black] people,” just for the record) from our (“their”) kids while at the same time talking about how “our kids” are overscheduled, without realizing the deep, deep irony and ideological underpinnings of these opposing narratives about what children need, we really are demonstrating how very fucking pathetic and screwed up and racist our standards are.