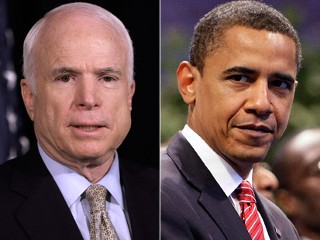 The third and blessedly final debate is at Hofstra University (REPRESENT!) in Hempstead, NY. Obama can knock McCain out, or to mix sports metaphors, he can simply hold serve: if the current polling holds more or less true Nov. 4, McCain could win every battleground state and still get rocked. (Don’t think the Republicans don’t know this either, throwing their monetary resources around to keep the carnage from hurting too many Senators and House members.

Expect McCain to be feeling type froggy tonight, what with Obama basically calling him a punk bitch for not bringing up Ayers to his face last week. Can McCain make this Ayers thing convincing? And even if he can, will it matter?

Alright, folks. Have at it.

Okay. McCain was fiery, but it wasn’t enough. He rolled at the “I’m not Bush” line two debates too late, and managed to butcher Joe the Plumber’s name. (It’s not “Wurzelberger.”) His taking issue with the ‘health of the mother’ thing struck me as a bad look. It’s over for this debate, and barring some crazy external event, over for McCain.

10:20- McCain says we spend the most money on some of the worst school districts in the country. I wonder how much of that has to do with big city school systems, which have large numbers of teachers, faculty and payroll, as well as costing tons to heat and maintain facilities, etc.

10:06- Roe v. Wade comes up for the first time in these debates. Hmph. McCain said he would not impose a litmus test, and that Obama voted against Roberts and Alito because they didn’t share his opinions on abortion rights. Obama brings up Ledbetter. McCain says Obama voted against a ban on late-term abortions while he was in the Illinois Senate. “If it sounds incredible, it’s because it’s untrue,” Obama says. He says the bill did not protect the health of the mother.

9:59- Joe the Plumber, again. In the context of a bald-faced lie. Obama wants to pander to Joe, too. He is decidedly less creepy doing so. McCain talks about Joe some more, but it’s so snarky. “Hey, Joe! You’re rich.”  This can’t be going over well.

9:55- I want Obama to stop laughing here. Maybe no one at home cares. Squiggly lines update?

9:47- Feels like a tie so far to me. Watching on ABC. My CNN folks, what do the almighty squiggly lines say?

9:43- Obama says Palin is capable and has excited the Republican base, but says McCain’s across-the-board spending freeze will make that special needs funding impossible.

9:42- Obama: Biden is a strong public servant who never forgot where he came from. McCain: Palin is a reformer through and through. Good job by McCain, politicizing Trig Palin.

9:40- Uh oh. This question, ostensibly, is about both their running mates. But it’s really about Palin.

9:35- Ah, there we go. ‘Mr. Ayers has become the centerpiece of Senator McCain’s campaign.’ Wow. This response/denunciation is really, really strong and pretty detailed. I think it also defuses the issue going forward, or at least makes it less effective. Good show. McCain wobbles  bit in repudiating the repudiation. Maybe the punk bitch stuff was on purpose.

9:33- McCain defends his supporters and the audience at his rallies. Hmmm. I wonder if this works. Still no Ayers.

9:31- The first person McCain has made famous: Joe the Plumber. Also, every time he says that, I think of Twista.

9:25- Bob Schieffer asked if they would say their allegations were out of bounds. McCain says that he wouldn’t have had to show his ass if Obama woulda agreed to town hall. He says Obama didn’t repudiate John Lewis’s remarks the other day. But, uh, he did.

9:23- “If you wanted to run against President Bush, you should have run four years ago.” Obama counters and said that the reason he brings up Bush is because their economic policy has so much in common.

9:16- I wonder how conservatives feel about McCain’s proposal to restructure mortgages. He says he would freeze spending. He says he would get rid of ethanol subsidies and the Marketing Assistance Program. He brings up the planetarium projector thing again and earmarks. As we’ve said in each of these debates: NO ONE CARES ABOUT EARMARKS. Obama: we had surpluses, now we don’t. We need a hatchet, not a scalpel.  McCain says he could balance the budget in four years. Uh, no.

9:02- McCain and Obama come out and shake hands immediately. Awwww. Now on to the crappy economy!