Bush to Congress: Nyah, Nyah! You Can't Make Me! 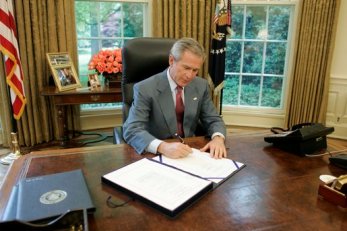 Line-item vetoes  allow a president to invalidate specific provisions of bills  that come across his desk. The problems with this are sort of obvious: a president picking and choosing what parts of bills he wants to invalidate and which parts he wants to honor would take legislative and spending authority away from Congress.  As such, they are not unconstitutional,  although presidents (Reagan and Clinton, specifically) have asked for the power to use them.

Yesterday, he was at it again, and the provisions he used them for are telling.

President Bush asserted on Tuesday that he had the executive power to bypass several parts of two bills: a military authorization act and a measure giving inspectors general greater independence from White House control.

Mr. Bush signed the two measures into law. But he then issued a so-called signing statement in which he instructed the executive branch to view parts of each as unconstitutional constraints on presidential power.

In the authorization bill, Mr. Bush challenged four sections. One forbid the money from being used “to exercise United States control of the oil resources of Iraq”; another required negotiations for an agreement by which Iraq would share some of the costs of the American military operations there.

The sections “purport to impose requirements that could inhibit the president’s ability to carry out his constitutional obligations,” including as commander in chief, Mr. Bush wrote.

In the other bill, he raised concerns about two sections that strengthen legal protections against political interference with the internal watchdog officials at each executive agency.

Presidential power expands, but it doesn’t usually contract. And so the next commander-in-chief will wield the new powers that Bush has carved out. Obama has said that he would forego the use of presidential signing statements as president, but his position actually contains a qualifier. McCain, for his part, has said he would ‘never’ use them.

*The ostensibly hard-core, small government conservative types the National Review are mad that Chris Buckley endorsed Obama, but can’t seem to muster any outrage for the Bush administration’s decidedly anti-conservative governance. The treasury secretary is using government money to buy interests in private banks,  the president has employed a program of warrantless wire-tapping and created a massive new department in the Cabinet , and yet all these people think Obama is a socialist?

** A list of most of them can be found here.