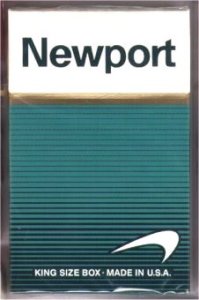 When I was but a wee lad, my moms would send me to the corner store to cop some cigarettes for her. That I was 10 or 11 didn’t seem to matter to the cats behind the counter at the store; I would ask for her cigarettes — always Benson & Hedges Menthol Ultra Lights — they would toss them on the counter, I’d pay and then route. I can’t figure out if the easy access to cigarettes was a function of being in the hood where the store owners were just more lax*, or that the laws surrounding cigarette sales had gotten tighter in the intervening years.**

Anyway, I bring up all this ephemera because of a bill introduced by Henry Waxman that would again give the FDA the power to regulate tobacco products, with a particular emphasis on flavored cigarettes. Sounds straightforward enough, right? The problem is that the bill exempts mentholated cigarettes from FDA oversight. Some members of the Congressional Black Caucus say that would have an averse affect on black communities, in which smokers overwhelmingly prefer mentholated cigarettes.

Menthol brands account for 28 percent of the $70 billion American cigarette market. While only 25 percent of white smokers choose menthol cigarettes, an estimated 75 percent of African-American smokers do.

The other issue is that many of members of the CBC receive a grip from tobacco companies, which makes many of them disinclined to push for changes in the legislation (Charlie Rangel, maybe unsurprisingly, is one of ’em).

Philip Morris over the years has been one of the biggest contributors to the caucus’s nonprofit Congressional Black Caucus Foundation. That financial support, in some years exceeding $250,000, and lesser amounts at times from other cigarette makers, has been the reason some critics perceived an alliance between big tobacco and African-American members of Congress, some of whom were willing to help fend off antitobacco efforts.

Among them, some critics have said, was Charles B. Rangel of New York. Although he supported some antitobacco initiatives, until the last few years Mr. Rangel staunchly opposed federal tobacco tax increases. He has said his stand was based on the disproportionate effect of excise taxes on the poor, not the thousands of dollars he received in tobacco industry political action committee donations.

Some caucus members have always seen tobacco money as a Faustian bargain and refused to take such donations, urging their colleagues to do likewise. One of them, John Lewis of Georgia, once told a reporter, “People are reluctant to criticize the giver, to bite the hand that feeds them.”

Black lawmakers who maintain strong tobacco industry ties include James E. Clyburn, who represents a tobacco-growing region of South Carolina and is majority whip of the House. Last year, Altria, the parent of Philip Morris, donated $50,000 to an endowment he established at South Carolina State University, a historically black college.

Buried in here is a question that has long racked my brain but for which I’ve never gotten an answer: why the hell do black folks smoke menthols?

When Chapelle famously asked on his “I Know Black People” game show sketch, he was greeted by a bunch of puzzled looks.

“That is the correct answer,” he said. “No one knows.”

The Times suggested that the disparity in smoking preferences between blacks and whites was due to the tobacco industry’s aggressive marketing of mentholated cigarettes to black people beginning in the 1950s (and anyone who read Ebony or Jet remembers that there were always Newport and Kool ads on their back covers). There’s also the argument that mentholated cigarettes are more appealing to younger smokers because it reminds them of candy. But that logic is sorta leaky: black smokers actually begin puffing later than other groups — groups who don’t prefer menthol.

Smoking initiation rates have declined among Blacks, while delayed onset has been consistently indicated. Overall, Blacks have lower smoking initiation rates during adolescence than Whites and Hispanics for both males and females. Blacks begin regular smoking primarily after the age of 18. Hispanics have an earlier onset of cigarette smoking than Asians/Pacific Islanders and Blacks, while they have a higher but similar age of initiation compared with Whites.

Young people who come from low-income families with less education are more likely to smoke. So are those who have less success and involvement in school and fewer skills to resist the pervasive pressures to use tobacco. Tendencies to take risks and rebel are among the other risk factors for beginning smoking.

Okay, but aren’t black people more likely to come from low-income families with less education and do more poorly in school?

Anecdotally, I don’t know any black folks my age (I’m 27) who smoke, save an ex.*** I’m sure there are some who do who I’ve just not seen smoke. But in my circle, nada. My mom said she smoked menthols**** because they were ‘cool’, when she was a young adult.

Anybody got any theories?

*People who were short on change would routinely get passes from store owners. Sometimes the proprietors would let folks skate completely, which probably meant they’d had some other informal economic arrangements with those people.

** Those pull-knobby machines that used to sit in the lobbies of check-cashing places? Gone.

***”She seems like a Marlboro Lights kind of girl,” a friend said one night as we mulled this over at a restaurant. I called the ex while we were waiting for our waitress; indeed, she was Marlboro Lights devotee.