The Cynic and Barack Obama. 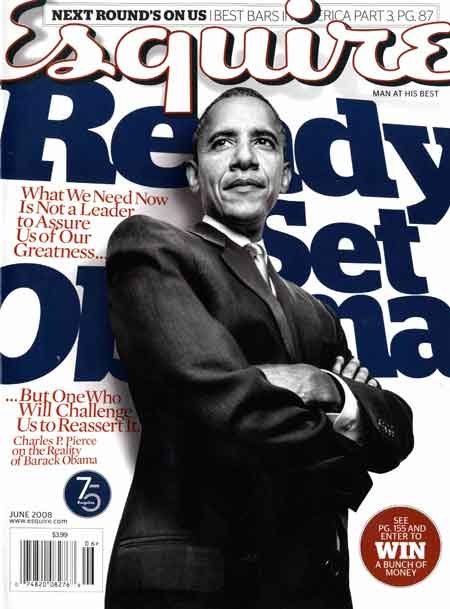 I’ve been meaning to shout-out last month’s Esquire for the cover story that perfectly encapsulates my feelings about the Obama campaign (cynicism via wounded idealism).

But also, check out the riveting and troubling profile of John Yoo by John H. Richardson. Yoo notoriously wrote the Bush administration’s torture memos, which put in play any interrogation techniques but those that “were equivalent in intensity to the pain accompanying serious physical injury, such as organ failure, impairment of bodily function, or even death.” That Yoo is a war criminal is taken as a given by a lot of people, especially progressives. But in the piece, he proves himself to be smart, funny and very, very sharp. And some of the points he makes aren’t easily dismissed.

“But at the same time,” I say, “you know that by writing that opinion, by using those words, you’re opening the gates.”

“I agree,” he answers. “The language is not pleasing, it’s not politically savvy — I didn’t see that as my job.”

“And you didn’t have any moral qualms?”

He looks me right in the eye. “I think there are some moral questions. But the other side of the moral question is the lives you might save. I have a hard time believing any responsible American president would have said, ‘No, absolutely not, do not ask him any more questions, give him a lawyer.’ I don’t think Al Gore would have said that.”

But those harsh interrogation techniques migrated straight to Iraq. What about that?

“That was definitely not permitted under the decision-making level I was at,” Yoo says. “It was clearly not. The Geneva Conventions fully applied in Iraq.”

And the memo he wrote that was made public this spring, which justified harsh interrogation techniques for military interrogators?

That worried him, he says. But it only applied to interrogators of Al Qaeda prisoners in Guantánamo, and Yoo says that he expressed his concerns to officials “at high levels of the Department of Justice, the White House, and the Department of Defense.”

Is it possible that partisan loyalty blinded him to the dangers of putting all that power into the hands of a president so reckless and extreme, the worst combination of cowboy machismo with this radical theory of executive power?

“I can see why people have that view, but I just don’t think this is the product of people who have this radical worldview.”

“But Cheney was primed. He said we would have to go to the dark side.”

Yoo doesn’t say anything for a moment, then answers in his usual measured tone. “In World War II, we interned people, tens of thousands of citizens. We tried citizens who were enemy spies under military commissions which had no procedures at all. We let the Air Force kill hundreds of thousands of civilians in firebombing runs in Europe. We dropped a nuclear weapon on Japan. Waterboarding we think is torture, but it happened to three people. The scale of magnitude is different.”

“But if the war goes on forever, we’ve created a torture state.”

“The White House launched an elective war against a country based on false premises.”

“They made a mistake.”

“But your theory puts the power in the hands of a person who then can invade the wrong country.”