The Trials of Lola. 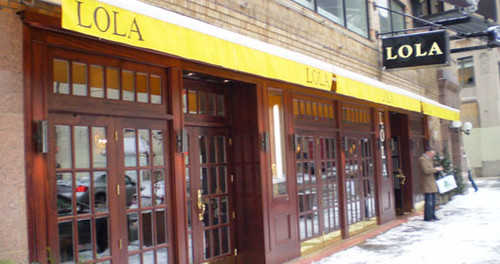 Ever since Lola* — one of those eateries that attracts impeccably dressed, upwardly mobile young Negroes — moved from Chelsea to SoHo, it’s been fighting with the neighborhood alliance over its petition for a license for liquor and the right to have live entertainment.

The Patrick-Odeens, the mixed-race couple that runs the spot, said that the opposition from the neighborhood group bears the scent of racism. The SoHo Alliance says that race has nothing to do with their stance: it’s just that the restaurant attracts the wrong type of crowd.

From the Village Voice:

First [the liquor license petition] was annulled by a state court, then the annulment was overturned by an appellate court. But the Soho Alliance is opposing that reinstatement, and because Lola is opening within 500 feet of three or more other license holders, a state law requires the SLA to consider input from the community board and others in the area—like the alliance.

Doesn’t sound so bad until you hear some of the alliance’s rationale. A money quote:

“I don’t think you need a martini to go with chitlins and collard greens. What wine goes with jambalaya? I can’t think of one,” [SoHo Alliance director Sean Sweeney said], ridiculing Lola’s need for a license.

A few days later, fliers were posted in doorways throughout Soho asking residents to come to C.B. 2’s full board meeting to “Say No to Lola.” The fliers called the restaurant a threat to the neighborhood, claiming it would increase crime because Lola featured rhythm-and-blues music.

Another money quote from the Voice:

The two also say that Sweeney has been particularly vocal at public hearings about Lola, and they suspect that he was behind an effort to paper the neighborhood with anti-Lola screeds. Flyers appeared around Soho warning that Lola’s r&b music would bring “unruly crowds” and “more crime” to the neighborhood. The Patrick-Odeens saw this as a racist attack, but Sweeney denies that he had anything to do with the flyers.

And he’s not shy about firing back at the couple.

“I am not racist. [Gayle Patrick-Odeen] is from Barbados. She’s a British subject; she’s not African-American. She didn’t suffer Jim Crow, Reconstruction, lynching. . . . For her to exploit the true sufferings of African-Americans is disgraceful,” says Sweeney.

The fate of the restaurant is still up in the air; it’s pretty hard to draw the after-work crowd without booze. But a few weeks back, some folk (including Gardy, one of our regular commenters) put together big “Save Lola’s” dinner party over the course of two evenings.