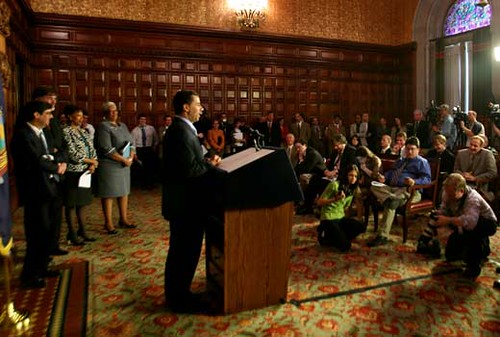 Speaking of those other states, Sully lamented the findings in a Los Angeles Times poll that said a slim majority of Californians were opposed to gay marriage, but his spirits were buoyed by a reading a new Field poll that found that Californians 18-39 were in favor of gay marriage by big, big margins. This is important as a initiative to repeal gay marriage in Cali is likely to be on the ballots this fall.

But the real reason for optimism is the timing of civil marriages. It now seems likely that the first civil marriages in California will take place in June. By the fall, thousands of Californians will be married. The initiative will be asking voters to do two disruptive things: change the state constitution and retroactively impugn these already-existing marriages. This is a tall order.

It is. Sully also pointed out that the Field poll found independents were in favor of Cali’s move too.

And the attempt to label this reformist measure as “far left” has not caught on:

“Voters who describe themselves as middle-of-the-road in politics approve of allowing same-sex marriage 53% to 35%.”

The tide on the issue is changing, and I think conservatives are going to be on the wrong side of history (as they so often are on civil rights issues).