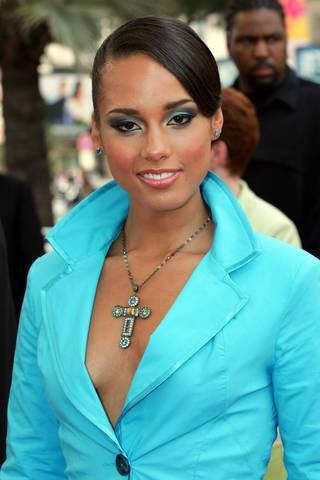 Alicia Keys thinks Biggie and Tupac were killed to ‘keep another great black leader from emerging.’

There’s another side to Alicia Keys: conspiracy theorist.

The Grammy-winning singer-songwriter tells Blender magazine: “‘Gangsta rap’ was a ploy to convince black people to kill each other. ‘Gangsta rap’ didn’t exist.”

Keys, 27, said she’s read several Black Panther autobiographies and wears a gold AK-47 pendant around her neck “to symbolize strength, power and killing ’em dead,” according to an interview in the magazine’s May issue, on newsstands Tuesday.

Another of her theories: That the bicoastal feud between slain rappers Tupac Shakur and Notorious B.I.G. was fueled “by the government and the media, to stop another great black leader from existing.”

Keys’ AK-47 jewelry came as a surprise to her mother, who is quoted as telling Blender: “She wears what? That doesn’t sound like Alicia.” Keys’ publicist, Theola Borden, said Keys was on vacation and unavailable for comment.

Though she’s known for her romantic tunes, she told Blender that she wants to write more political songs. If black leaders such as the late Black Panther Huey Newton “had the outlets our musicians have today, it’d be global. I have to figure out a way to do it myself,” she said.

The multiplatinum songstress behind the hits “Fallin”’ and “No One” most recently had success with her latest CD, “As I Am,” which sold millions.

I tend to think that Tupac’s political impact was way, way overstated (his ‘positions’ all seemed fairly conventional as black folk go). There never seemed to be anything ‘revolutionary’ or even political about Pac, save some incidental details in his biography and the hyperbole that attends posthumous praise.

But here’s a question: are musicians ever catalysts for political change? I’m not talking about creating a song that captures the zeitgeist, but actually creating the political moment. One of those Irrefutable Black Truths is that hip-hop musicians are implicitly political agitators oriented against American evils.* Groups that are really vocal about their ideology tend to be commercially marginalized,** and since popular hip-hop is pretty amoral, so maybe when mainstream MCs make tepid or even completely incoherent political statements,*** folks are going to applaud them for ‘speaking out.’ Even if it’s dumb or problematic, at least it’s about something. Whatever that means.

Or maybe…maybe if there’s a  prism through which you view the wider world  — in this case, it’s superficially aggressive, superficially anti-authoritarian hip-hop — and one of the griots of that tradition is gunned down, he necessarily becomes a martyr for whatever vaguely defined/poorly articulated/largely image-driven worldview for which he was supposed to be carrying the torch.

I could be wrong, though.

*Someone’s gonna come in here and say that hip-hop *used* to be aggressively topical and socially relevant, but that’s a mischaracterization borne of a desire to give hip-hop more social significance, which probably isn’t even necessary. Before P.E. and all of that, hip-hop was party music and shit-talking. And the people who donned Africa medallions put them down when hip-hop moved on to the Next Thing.

** See: dead prez. And maybe that’s for the best. Y’all can ride for them all you want, but I will always think them toweringly corny.

***Like Ms. Keys, when hip-hop artists decide to drop knowledge, it tends toward the paranoid. Lauryn Hill might be the famous example of this. Because of her other gifts, people often overlooked the fact that the stuff she was saying in interviews was nonsensical, and whenever I’d point it out, I’d get shouted down for challenging a Black Queen or somesuch. Now everyone agrees she’s out of her damn mind, which is an awful sort of vindication.