A Country Full of Jailbirds. 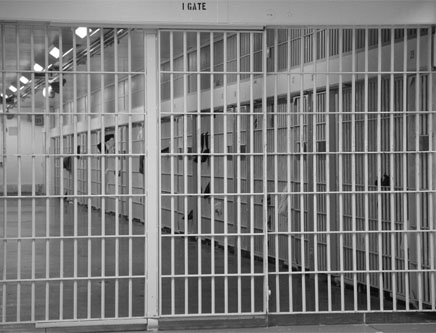 The Pew Center on the States released a study yesterday that found that for the first time ever, one in every 100 Americans is in a prison or jail. That’s 2,319,258 people — a population bigger than that of Baltimore and Philadelphia combined.

The report also found that for all the money being spent on incarceration, nothing has been done to lower recidivism rates (half of those in prison will return three years after their release).

“For all the money spent on corrections today, there hasn’t been a clear and convincing return for public safety,” said Adam Gelb, director of the Public Safety Performance Project. “More and more states are beginning to rethink their reliance on prisons for lower-level offenders and finding strategies that are tough on crime without being so tough on taxpayers.”

As mind-boggling as those number are, they might not be the most harrowing. One in 36 Hispanic adults is behind bars. For black adults, it’s one in 15.  For black men between the ages of 20 and 34 that number is one in 9.

The study also says that there’s not a direct correlation between increase in crime and rates or incarcertation or even (as I was gonna guess) a corresponding increase in the nation’s general population.

A surge in the nation’s population at large. Instead, more people are behind bars principally because of a wave of policy choices that are sending more lawbreakers to prison and, through popular “three-strikes” measures and other sentencing laws, imposing longer prison stays on inmates.

Obviously, this means more money is being spent on locking people up. Vermont, Michigan, Oregon and Connecticut all allocate more funding to prisons than higher education.

One of the unquanitifiable (but very serious) consequences of locking up all these people is that it normalizes insitutionalization. As pointed out by Jennifer Gonnerman in her compelling book, Life On The Outside, the kids making monthly visits to see their parents behind bars are in correctional facilities more than they’re in doctor’s offices. That’s not a small thing.

This American Life devoted an entire episode to prison life — including the heartbreaking story of a little boy who visits his mom on Mother’s Day.* locked up for five years on conspiracy because she made four phone calls for her drug-dealing boyfriend.

*This story begins at the 20:40 mark, but you should really listen to the whole ep. It’s riveting.