Who's Really a Sex Offender? 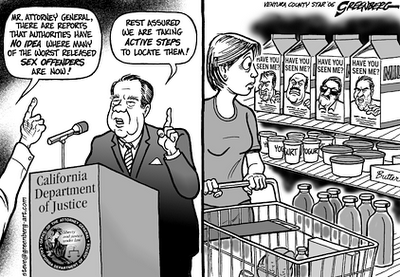 California is mulling over whether to hop on board a federal sex offender act that would put kids as young as 14 on a national public registry.

But we should consider cases like those of “Ricky,” a 16-year-old who had a typical high school romance with a girl who he thought was his age.

Amanda turned out to be 13. Ricky was arrested, tried as an adult, and pleaded guilty to the charge of lascivious acts with a child, which is a class D felony in Iowa. It is not disputed that the sex was consensual, but intercourse with a 13-year-old is illegal in Iowa.

Ricky was sentenced to two years probation and 10 years on the Iowa online sex offender registry. Ricky and his family have since moved to Oklahoma, where he will remain on the state’s public registry for life.

Being labeled a sex offender has completely changed Ricky’s life, leading him to be kicked out of high school, thrown out of parks, taunted by neighbors, harassed by strangers, and unable to live within 2,000 feet of a school, day-care center or park. He is prohibited from going to the movies or mall with friends because it would require crossing state borders, which he cannot do without permission from his probation officer. One of Ricky’s neighbors called the cops on him, yelled and cursed at him, and videotaped him every time he stepped outside, Ricky said. …

His mother, Mary, said the entire family has felt the ramifications of Ricky being labeled a sex offender. His younger brother has been ridiculed at school and cannot have friends over to the house; his stepfather has been harassed; the parents’ marriage has been under tremendous pressure; and strangers used to show up at their door to badger the family. One neighbor came to the house and told Mary he wasn’t going to leave them alone until they took their “child rapist” away, so they moved, she said.

Without trivializing the untold number of cases of molestation and sexual abuse out there, it seems like the letter of the law in instances like this could be used to prosecute almost any teenager. Some critics of these laws go further.

Human rights advocates and even some prominent sex crime prevention groups warn this is one more act in a long list of sex-offender laws across the country that appeals to voters but is ineffective and counterproductive. They argue that almost all sex offender laws in the United States fail to solve the problem of sex crimes because they drive people underground, block paths to treatment and focus on a high-profile case, like that of 6-year-old Adam Walsh, who was abducted from a Florida department store and killed in 1981, and miss the fuller picture of sexual violence.

UPDATE: There’s a thoughtful discussion on statutory rape, race, and class over at Racialicious.