Blogging The Wire: "Not for Attribution," Season 5 Episode 3 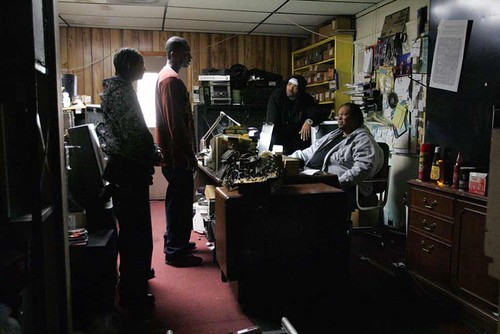 PostBourgie is hosting a running season-long discussion of the final 10 episodes of HBO’s ‘The Wire.’ Karas Lamb, a screenwriting student from Philadelphia, penned this week’s recap. If you haven’t seen the episode: SPOILERS.

I’m just going to say it: not that you couldn’t have guessed three seasons ago, but McNulty is off his shit.

This time he threatens to drag everyone else down with him, and not just the cantankerous fucks like Clay Davis who actually deserve a little purgatory.

The best part of all of this craziness is that Freamon is now an accomplice. After Bunk invites Lester into the argument between he and McNulty to try to talk some sense into him, Lester flips the script by agreeing with McNulty instead. What gives it even more promise is his willingness to show McNulty how shortsighted he is being — McNulty just needs to do it right. Bunk is officially prepared to wash his hands, and tells them so.

Has everyone had a sip of that sweet, sweet Colvin Kool-aid? Or is it really just time for people to take matters into their own hands? The time for action long passed — it’s time for reaction. Survival of the fittest, or maybe the most clever. And who of Simon’s characters is more clever than that calculating whittler of dollhouse furniture and criminal intent, Lester Freamon?

With the feds out and Lester’s assertion that Marlo is getting sloppy and he only needs two more weeks up on the tap, it is clear that Freamon is going to go all out. This is the same Freamon who chided Greggs and McNulty during the third season for disobeying Daniels after he stalled them out on the wiretap. What would make someone like Freamon, the P in Police, turn over? Probably the same thing that corrupts everyone else in town.

And maybe — just maybe — he can smell that career case exploding and he isn’t prepared to turn the heat down. In his estimation, “The dead men don’t care! No one cares!”

McNulty knows they’re close. They were close last season and the suggestion that they should hurry up and wait is an insult to “good police.” Moreover, it’s a complete slight to an obsessive compulsive alcoholic fuck-up like McNulty who has never been certifiably good at anything else in his life except for police work and getting laid (the latter failing to garner any medals or commendations). I can’t say I didn’t see this coming. It’s loud and clear by the final scene in episode two, where McNulty fixes the crime scene of the homeless death to look like a serial murder. McNulty’s busy shopping for craft supplies. Is this what it boils down to for a desperate homicide detective? Tie a red ribbon ’round the cold dead hand? Martha Stewart would be proud.

Meanwhile Ashy Larry is shaking in his boots at the State’s Attorney’s hearing and bringing shit back to Clay Davis. “We goin’ to jail!” he says to Davis in the way that only Ashy Larry can make great. The one thing that stands on the side of Clay’s potential resiliency is the tortoise’s speed with which the trial is moving. One witness set to testify in front of the grand jury asks for things to be sped up: “I’m the VP of a major financial institution!”

Another responds, “Who the fuck isn’t?”

Clay has time to get right. Too bad he won’t have any help, especially after Carcetti 86’s his plea for rescue.

Back at City Hall, Valchek is going in for the kill on Burrell and Rawls, suggesting Carcetti instate him as acting commissioner of the BPD until they can finish grooming Daniels for the job. Norman and Carcetti know better: Narese and the ministers ain’t having it. (Let’s face it, if God doesn’t want Valchek, what chance does he really have downtown?) I’m sure this isn’t the last we’ll see of Valchek. If nothing else, he’s good for being the BPD’s version of Pearl from 227; gossiping to entertain himself and possibly a pension bump.

It’ll be interesting to see the mess that Burrell and Rawls are sure to cause, possibly at the expense of Carcetti’s administration, to avoid going down quietly. The fallout threatens to reveal what we’ve been wondering about Daniels’s sordid past, which has been hinted at before. That potential explosion is so frightening that it reunites Cedric and Marla long enough for them to brainstorm over how he should go about keeping both of their asses clean when the shit hits the fan. (Don’t fret, fellow Wire junkies: it indeed will.)

Burrell’s book-cooking may end up giving enough legs to the media’s interest in all of this, and McNulty might indeed get the return of the wiretap. The problem brewing, though, is the personal toll McNulty and the other scattered members of Major Crimes’ staff will pay for their complicity.

Meanwhile, everyone in the newsroom just wants to keep their jobs after news of cost-cutting and buyouts comes down from on high. Then again, since so little value is given to their professional merits, it’s probably safe to say that some of them don’t. Moments after his meeting with Whiting and Klebanow, Twigg is clearly over it; the buyout a much greener pasture than the death valley of ye olde copy desk. Gus wants to know why there’s cuts in the newsroom when the company’s still profitable. Yes, they can probably do more with less to the detriment of their staff’s morale, but they can’t do more with nothing. So David God, if you’re reading: please open up your almighty ass and fart a ray of hope over the city of Baltimore and the newsroom of The Sun. Give Whiting’s job to Gus Haynes and the story props to Gutierrez. Being so optimistic probably isn’t wise on my part, but Gutierrez deserves something for all of her trouble. What’s fair in getting up in the middle of the night after working a double murder lead courtesy of Marlo’s muscle, only to find her story buried and twelve inches below the fold? If not for that, then throw her a bone for stomaching the nauseating task of being Scott’s less heralded but more talented co-worker.

And while we’re on the subject of Gutierrez, I’d like to address Steve’s issue with the show’s handling of its female leads. I think she may finally be the character to break that cycle. Hopefully Gutierrez doesn’t fuck McNulty and end up lost in the sauce. I think she’s smarter than that, though. McNulty needs her way too much for that not to be the case anyway. But what’s really fair in Simon’s Baltimore?

Scott’s made-up quote nods at the tensions downtown: “Carcetti may be holding the knife, but Daniels sharpened it for him…he’s been critical of Burrell since the election.” Umm, wow? Gus thinks it’s a great quote, until Scott’s dubiousness resurfaces when he cannot name a source and leaves Narese holding the bag to save face. “Twigg’s not the only guy who’s game around here!” Scott says to Gus.

Marlo is seeking his chance to play with the big boys as well; visiting the Greek’s for a chance to speak with Vondas. He enters with Snoop and a briefcase full of money with the intention of doing business. Vondas gives him face time but has no interest in him or his money, at least not until it has been cleaned. Marlo seeks the assistance of Prop Joe to make this happen. Vondas would have it no other way, and so it does: everything has to go through Joe. Marlo’s britches clearly aren’t as big as he thought they were.

What gives this storyline real legs is the fact that Prop Joe has been cleaning his money through donations to the churches and their civic projects on tiny Caribbean islands — civic projects that only serve to mask off-shore accounts for street money. What is this going to do to Narese and the ministers down the line? Man! I’m excited.

Back on the corner, Marlo gives word to Prop Joe and Cheese that he will give “fifty” to anyone in the co-op who steps forward with a line on Omar. Marlo is obviously still upset about the great Deebo-ing of Season 4:

Cheese offers up Butchie for the money, unbeknownst to Joe — something that’s definitely going to haunt him later. Butchie offers nothing to Chris and Snoop. They offer him an out: lights out.

Ah, well. Back to square one. Marlo takes a trip to check on his money which Joe has stashed in the Caribbean. That was hilarious! What I loved was the juxtaposition of Marlo (in the islands @ Banque Popular Des Antilles) with Omar and his boy in Puerto Rico.

People have had their criticisms of the show and this season in particular so far. No season apologizes for the losses or changes from the past. I like that. I like that the writers stand behind their choices and expect you to be intelligent enough to deal with them, to get them.

This season, however, had taken a turn in the beginning that had many a fan of The Wire anxious about their love for the series.

But don’t you trust David Simon by now? The ten episode thing is a bit of a downer, but let’s work with what we’ve got here.

By the end of Episode 3, McNulty still doesn’t have his write-up yet, but he and Gutierrez are working on it. The paper is in shambles, and Gus is charged with the SOS.

Government is unraveling and no one is safe. Though the wire is down, it obviously isn’t out not if Freamon and McNulty can help it. And though Marlo is settling scores, Michael stands to change the game. Nothing stays the same on this show. That may be where its brilliance lies, to some extent.

Let us pledge no longer to remain allied with the tragedies and characters of the previous seasons to our own detriment as viewers. I know it isn’t easy.

It just has to happen. You can understand that. Besides, how could you not like the idea of where Freamon is prepared to take us?

You don’t? Alright, then. Whatever!

If all else fails for all of you hardliners who miss Stringer Bell and the towers; longing openly for The Wire of days past, you can at least take solace in this: “Omar back.”

I don’t know about you, but I’m tumescent.

Words to live by this week:

Gutierrez: “Three people murdered in a house and it gets twelve inches below the fold. Explain that to me.”
Johnson: “There’s no explaining it. Advertising’s down. We’ve got a smaller news hole and we’re not managing it well. We messed up. I’m sorry.”
Fletcher:” Wrong zip code. They’re dead where it doesn’t count. If they were white…you would have had 30 inches off the front.”
Gutierrez: “It would have been my first front page where I didn’t share a byline.”
Fletcher: “Yeah?”
Gutierrez: “I drove down to the Port Covington plant this morning to get a copy.”
Fletcher: “You ain’t the first to do that.”

Latest posts by karas (see all)