Home » Browse PostBourgie » Another One Bites the Dust

Another One Bites the Dust 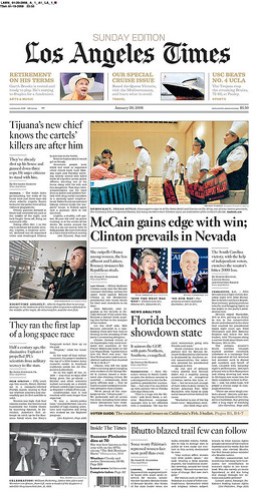 I thought I had read yesterday’s headline before: “L.A. Times editor is forced out.” In fact, I had – four times in the past three years.

“The removal of the editor, James O’Shea, by the publisher, David Hiller, mirrors the odd spectacle of a little more than a year ago, when Mr. Hiller’s predecessor, Jeffrey M. Johnson, was fired for refusing to make layoffs. Both of the dismissed men were longtime employees of the Times’ owner, The Tribune Company, which was taken over last month by Samuel Zell, the Chicago-based real estate magnate. Both were expected to rein in the fractious Los Angeles paper but instead sided with the newsroom and lost their jobs for it.”

The story of the L.A. Times and the Tribune Company’s inability to maintain a Times editor also mirrors the problem of the 21st century for American newspapers: balancing corporate interests with newsroom priorities. Newspapers across the country have weathered similar challenges, but few have been so dramatic.

Are O’Shea, and those before him like Dean Baquet, heroes for standing up to the corporate bullies, and risking their livelihoods in hopes of saving their staff? What difference does siding with the journalists make when, at the end of the day, little has changed because the two sides are still disconnected, management will likely look for an editor whose vision more closely reflects its own, and there is one less person working on the inside to fight budget cuts and a growing appetite for soft news?

The entire situation is a conundrum to me. Unless the ownership structure of newspapers changes, it seems that examples of a dying newspaper industry will continue to be a part of the daily news cycle. As publicly owned entities, they are at the whim of their corporate owners.

However, papers like the St. Petersburg Times, which is a for-profit enterprise but is owned by a non-profit enterprise, (the Poynter Institute for Media Studies), have been “better equipped to get through difficult times without having to resort to the slash-and-burn tactics.” But even that paper has not been immune to the declining ad revenues plaguing most publicly traded newspaper companies. It (sadly) closed one of its long-standing suburban bureaus last year, and is currently in a hiring freeze.

If newspapers are not deemed profitable enough, fewer people will want to work for them, especially when their earning potential could be so much higher in another field. The Internet holds promise, but at this point it also indicates that reporters will have to produce even more and under greater time constraints given that fewer of them are covering our communities. And while newspapers are getting better at providing quick and clean copy online, they haven’t quite figured out how to make money by doing so.

Maybe the L.A. Times story indicates that newsroom leaders and corporate owners should work harder to meet each other halfway. But is that even feasible when their values appear to be so far apart?